Goodfellow AFB, Tex. has long b 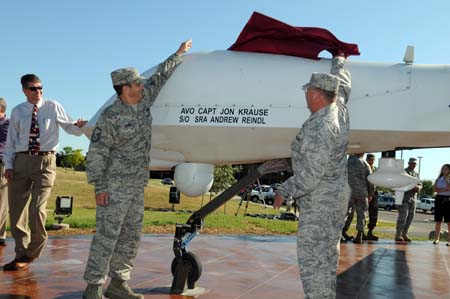 een a hub for the training of imagery analysts who subsequently served as sensor operators for Predator unmanned aerial vehicles. Now, as of May 27, it is also one of the few Air Force installations to host a Predator aircraft on static display. Its Predator, tail No. 13, has a past that links it to Goodfellow. Entering the Air Force’s inventory in 1997, Tail 13 was immediately deployed to Bosnia where it was dispatched on suicide mission to locate surface-to-air missiles. Though its operators lost contact with it early in the mission, the aircraft returned to base six hours later, allowing them to land it safely. The sensor operator on that mission was then-SrA. Andrew Reindl, who, now as master sergeant, is an imagery analysis instructor with Goodfellow’s 315th Training Squadron, teaching the next generation of Predator sensor operators. Reindl joined with officials from the 17th Training Wing on May 27 for the display’s dedication ceremony. His name is painted on the Predator, along with then-Capt. Jon Krause, who piloted it on that mission. (Goodfellow report by SrA. Stephen Musal)