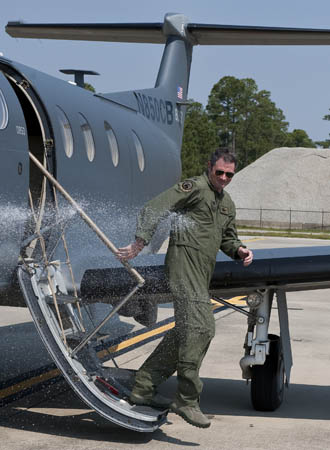 After 3,200 combat flying hours, Lt. Col. Jeffrey Neely flew his final sortie as an active duty airman. Neely, who, according to the Air Force, is the service’s most experienced combat pilot, landed his PC-12 at Hurlburt Field, Fla., on March 27, thereby completing his last flight and capping a 21-year Air Force career. “Not all of those hours were great,” said Neely, who received the customary spray-down from his colleagues upon exiting the aircraft. “Bottom line, I feel honored to have had an impact and humbled by the sacrifice made by others,” he added. Logging more than 6,400 total flight hours, Neely ended his career as operations director of Hurlburt’s 319th Special Operations Squadron. Commissioned from ROTC in 1991, Neely served in testing and acquisitions before earning his wings in 1997. “All I wanted to do was fly and keep the guys on the ground out of trouble,” recalled Neely, who commanded the 319th SOS through six combat deployments. (Hurlburt report by A1C Michelle Vickers)