Skip to content
Secretary of the Air Force Frank Kendall waves to the audience after speaking during a Hispanic Heritage Month event at the Air and Space Forces Association headquarters in Arlington, Va., Oct. 14, 2022. U.S. Air Force photo by Eric Dietrich
Expand Photo 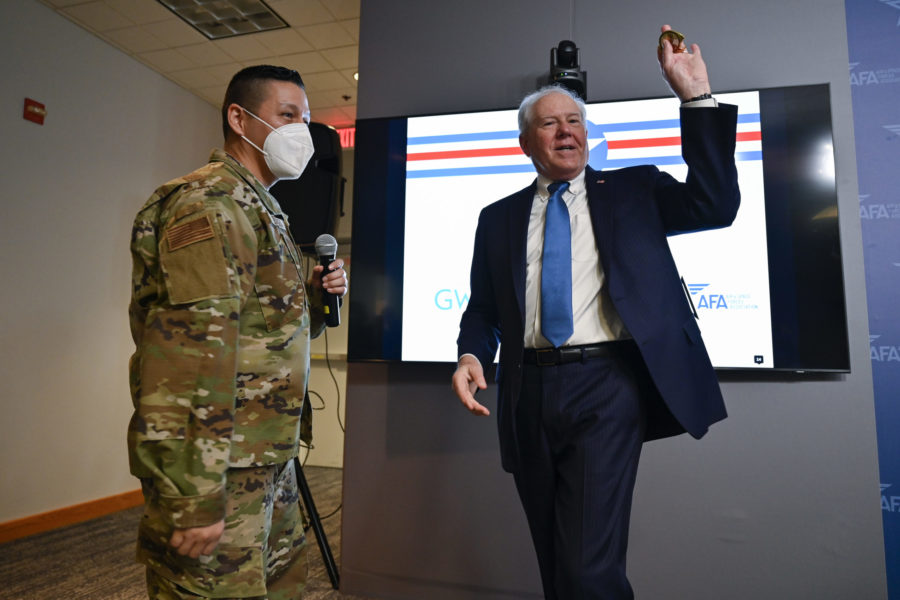 Air Force Secretary Frank Kendall said in October that the service needs to do a better job of identifying, recruiting, and mentoring Hispanic/Latino officers, especially at its very highest ranks.

Now, a group of lawmakers is asking for a formal review to determine what exactly is holding Hispanic Airmen back from joining the Air Force’s general officer corps—and for a plan for how to fix it.

The Congressional Hispanic Caucus (CHC), a group of 36 Democrats across the House and Senate, sent a letter requesting the internal review to Kendall on Nov. 16, citing statistics that show that just 2.6 percent of generals and admirals in the U.S. military identify as Hispanic or Latino.

The Department of the Air Force is no outlier, with just 17 Hispanic generals out of 593 total, according to the most recent data—2.9 percent. For the Active-duty Air Force and Space Force just three general officers identified their ethnicity as Hispanic/Latino, less than one percent of the entire general officer corps. None are three- or four-star generals.

Kendall noted those statistics during a conference sponsored by the Air Force’s Hispanic Empowerment and Advancement Team (HEAT) and hosted by the Air & Space Forces Association on Oct. 14.

“[Chief of Staff Gen. Charles Q. Brown Jr.] and I briefed [Defense Secretary Lloyd J. Austin III] recently. We went through our general officer posture, basically, and the thing that jumped out at us was that we are not promoting enough Hispanics to the senior ranks,” Kendall said at the time. “So we’ve got to ask ourselves: Why is that true? And we’ve got to go figure out what to do about it.”

At the time, Kendall didn’t detail the department’s plans for how it would investigate those questions—and now, the CHC is pushing for specific plans and asked in its letter for a response from Kendall by Jan. 11, 2023.

In particular, the legislators want to know “how the DAF plans to conduct a review to identify barriers holding Latino officers from rising to the senior ranks of general officer (O-7 to O-10) and to provide countermeasures and action plans to address identified Latino disparities in the DAF over the next 10 years,” the letter states.

Barriers and disparities are both areas where the Air Force has been conducting work as of late, with its Barrier Analysis Working Groups, of which HEAT is one, and its disparity reports, released in 2020 and 2021.

In particular, the second disparity report released in September 2021 found that Hispanic/Latino Airmen and Guardians were more likely to be subjects of Air Force criminal investigations and less likely to be selected for enlisted leadership positions or as squadron/group commanders. The Hispanic/Latino population was also underrepresented in officer accessions, officer promotions, and in key career fields such as pilot, which often fill the ranks of leadership.

When the second disparity report was released, both Kendall and the Air Force inspector general emphasized that it was meant to merely record disparities, not identify or address the root causes of them. Further analysis was needed, they said, similar to the root cause analysis done for the first disparity review, which focused exclusively on Black Airmen and Guardians.

A little more than a year later, such analysis for the second report has yet to be released. The Department of the Air Force did not immediately respond to a query from Air & Space Forces Magazine as to if and when that analysis will be made public.

The Congressional Hispanic Caucus did not give a deadline by which it wants the Air Force to conduct the proposed internal review or formulate action plans. But a spokesperson for Rep. Salud Carbajal (D-Calif.), who helped lead the drafting of the letter, told Air & Space Forces Magazine that the members are hoping Kendall will lay out an “expeditious timeline.”

Members decided to raise the issue when they did, the spokesperson added, “after meetings with Latino veterans and advocates.” Carbajal is a member of the House Armed Services Committee, as are fellow caucus members Rep. Sylvia Garcia (D-Texas), Rep. Veronica Escobar (D-Texas), and Rep. Ruben Gallego (D-Arizona).

But while CHC members are pushing for a plan to increase diversity in the upper ranks, they also noted that solutions may take time to implement, especially given how long it takes officers to reach the upper ranks.

“Given Congress’ involvement in promoting diversity, equity, and inclusion over the last several years, and the sensitive nature of this issue, this is an area of great concern to the CHC and an issue that the Caucus understands requires the Department further develop a pipeline of junior and mid-grade officers,” the letter states.