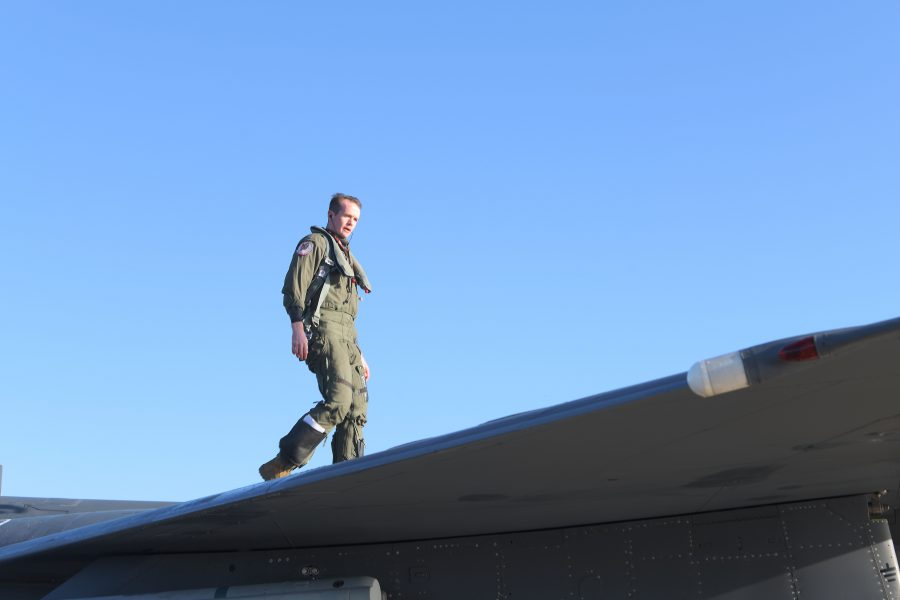 Lakenheath Airman Recognized for Leading Through Combat and COVID-19

The annual award—whose namesake, Brig. Gen. James Robinson “Robbie” Risner, was the first living service member to receive the Air Force Cross—recognizes the Weapons School alumnus who makes the greatest contribution to USAF’s combat capability in the year following his or her graduation from the elite institution.

In this case, it recognized Johnson’s leadership from the time he departed Nellis in the pre-pandemic days of 2019 through June 2020.

Johnson recalled that he had approximately two months’ worth of typical “day-to-day operations” before finding out his squadron was being activated as part of USAF’s Immediate Response Force, giving them just two weeks’ notice before heading to Al-Dhafra Air Base in the United Arab Emirates, he said.

Once they arrived in the UAE, the squadron “immediately started flying eight to 10 combat lines a day along with everyone else in the area of responsibility, with a focus on the ex-fil[tration] of forces out of Syria as we started to retrograde U.S. forces,” he said. They also flew “a lot of convoy escort.”

The Lakenheath Airmen had no idea when their ETA back in the U.K. might be, but it didn’t take long until they found out they were being deployed again.

On Christmas 2019, the squadron got word that its Airmen and their 18 fighter jets would head to Prince Sultan Air Base, Saudi Arabia, where they’d be flying combat missions—a prospect that presented the squadron with “a lot of logistical aspects to work through.”

The deployment was meant to spread out forces more thinly throughout the Air Forces Central Command region in the midst of rising tensions between the U.S. and Iran after the killing of Quds Force Commander Gen. Qassem Soleimani, Johnson said.

“And then from there, we began flying combat missions in [Operation Inherent Resolve], as well as flying missions in the Arabian Gulf supporting our Navy brethen as they transited the Strait of Hormuz during a time of heightened tensions,” he added.

This deployment also left the squadron in the hot zone, so to speak, after Iran attacked al-Asad Air Base with missiles in retaliation for the military leader’s death.

And concluding such a hectic deployment might normally seem like a relief, but the squadron returned to Lakenheath in early March to find that the COVID-19 had also moved in, forcing him and his squadron to figure out how to readjust in the middle of a pandemic.

Lt. Col. Kenneth Juhl, who commanded Johnson when he was assigned to the 17th Weapons Squadron as a Weapons School Student, called him “a natural leader” who squirms at the prospect of discussing his own accomplishments but who jumps into quietly confident action as soon as he’s called upon to lead.

Juhl said Johnson’s grace and professionalism under the pressures of a high ops-tempo year that saw him deployed for 12 out of 15 months exemplified his suitability for the award.

“He could have been upset at the situation that they were placed in and said it wasn’t fair, but that’s not Thunder’s personality,” Juhl said in a Dec. 18 interview. “He said, ‘This is what we’re doing, so fellas, get behind me, and my brothers and sisters in arms, we’re … gonna go do the job,’ and that kind of attitude in our world is very infectious in a good way. … The people will rally around someone who knows what they’re doing and has the confidence to lead, and he was always that way and still is.”

Johnson made no bones about his discomfort with the spotlight, admitting that he was essentially voluntold to assemble bullet points for a Risner Award package.

“I don’t think I did anything special,” he told Air Force Magazine. “I think I just did what any other weapons officer would have done, and that’s just be the squadron patch for deployed squadron.”

But at the end of the day, Johnson bested 72 other nominees to take home the prestigious honor.

In the true spirit of the Weapons School’s unofficial maxim of “humble, approachable, credible,” Johnson said the award was a testament not to himself, but his squadron and his weapons platform.

“It not only shows their willingness to sacrifice for their country, but then also on a bigger level, just the relevance of the Strike Eagle, and how a CFAC … always wants the Strike Eagle in their arsenal,” he said.

Johnson is slated to head back to Nellis to join the 422nd Test and Evaluation Squadron’s Strike Eagle Test Division in March 2021.