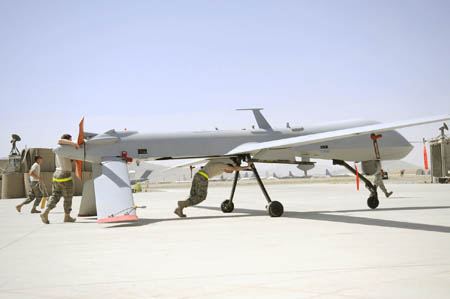 of the 62nd Expeditionary Reconnaissance Squadron at Kandahr Airfield in Afghanistan are continually busy supporting coalition ground troops fighting insurgents in the country. The unit’s primary role is to launch and recover all MQ-1 Predator and MQ-9 Reaper armed remotely piloted aircraft that operate over Afghanistan. “Whether it’s locating insurgents launching rockets or eliminating local Taliban commanders, we have been fortunate to make a positive impact with very few resources due to proactive aircrews and close integration with supported units,” said the squadron’s commander, whom Air Force officials did not name due to security concerns. Some of the unit’s greatest successes have involved cases where the RPA’s overhead presence led to no munitions being employed in an area, said squadron officials. For example, a Predator’s full-motion video led to an aborted F/A-18 fighter stike after the joint terminal air controller determined that the risk of collateral damage was too great, they said. (Kandahar report by SSgt. David Carbajal)