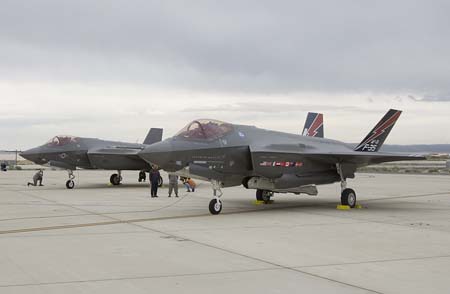 Air Force is preparing for the eventuality that there will be a delay in the F-35 strike fighter acquiring the capability to deploy nuclear bombs, Maj. Gen. William Chambers, who oversees nuclear matters on the Air Staff, told lawmakers Wednesday—and on the previous day—in testimony. Air Force F-35As are expected to assume a nuclear role for NATO once they arrive for basing in Europe. They will replace USAF F-15Es and F-16s stationed there that currently have this dual nuclear-conventional mission for the alliance. Chambers said US Air Forces in Europe “has a number of planning options underway to cover this capability . . . in the event of a slip.” He assured that “some portion of those [F-15Es and F-16s] will continue to perform the mission until the F-35 is ready and fully integrated and deployed to Europe.” Air Force officials expect up to an additional two-year slip in the F-35A’s in-service date based on the most recent changes to the multiservice F-35 program. That could mean USAF’s first F-35A unit is not ready for operations until 2018. Chambers said it’s not known yet what that slip would mean for the aircraft’s nuclear integration. Continue