Joining Forces to Save Lives in Afghanistan 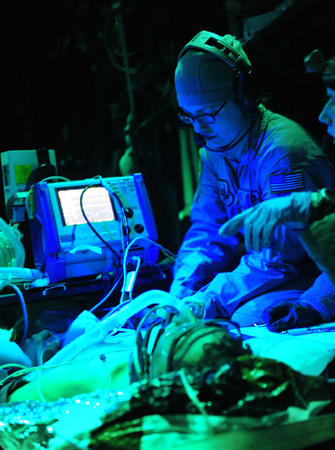 first all-Air Force Critical Care Air Transport and Aeromedical Evacuation Team is now operating with HC-130P King aircraft assigned to the 76th Expeditionary Rescue Squadron in Helmand province in southern Afghanistan. The team last month completed its first mission and continues saving US, Afghan, and coalition lives via medical and casualty evacuations, according to squadron officials. Lt. Col. Peter Dominicis, 76th ERQS commander, recounted a mission on Jan. 18 to transport a marine with burns to more than 80 percent of his body. “I don’t think he would’ve survived if it hadn’t been for the [CCAT/AE team],” he said. The CCAT members complement their AE counterparts by being able to attend to wounded in more critical condition during the evacuation flights. (Camp Bastion report by TSgt. Beth Del Vecchio) (For more on CCAT, read Air Guard Jumps to Fill Critical Care Need.)