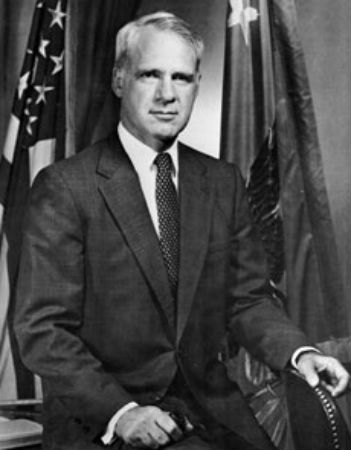 James R. Schlesinger, who served as Secretary of Defense from 1973 to 1975 under Presidents Richard Nixon and Gerald Ford, died on Thursday in Baltimore. He was 85. He counseled three different Presidents as Chairman of the United States Atomic Energy Commission, Director of the Central Intelligence Agency, Secretary of Defense, and as the nation’s first Secretary of Energy. Schlesinger “was a brilliant economist, and had a keen understanding of defense budgeting … I relied on his counsel when I was a United States Senator and as Secretary of Defense have benefitted enormously from … his guidance … as a member of the Defense Policy Board,” said Defense Secretary Chuck Hagel in a statement. Schlesinger “devoted his career to ensuring that the American military had the resources it needed to defend against, and ultimately defeat, the Soviet Union,” said House Armed Services Committee Chairman Rep. Buck McKeon in a statement. He also was “the foremost intellectual architect of the policy of nuclear deterrence,” added McKeon. Schlesinger was a big proponent of the A-10 and the F-16 and spent a lot of his time advocating for a stronger NATO. He promoted the idea of “burden-sharing” amongst NATO members and sought to standardize equipment within the Alliance and increase defense spending by NATO governments up to five percent of each country’s gross national product, according to his official DOD bio. (See also Schlesinger’s Second Bite from the February 2009 issue of Air Force Magazine and an excerpt from Schlesinger’s March 4, 1974, DOD report on “Strategic Forces” from the February 2006 edition of Air Force Magazine.)