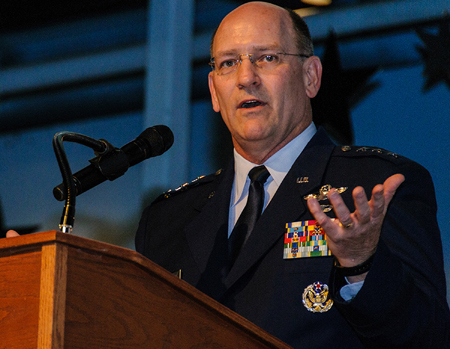 became Air Force Reserve chief and Air Force Reserve Command boss in a ceremony July 30 at Robins AFB, Ga. “I will not overlook that the Reserve’s strength is based on a careful balance of family, employer, and military responsibilities—the triad we always talk about,” he said upon assuming command. He added, “I will focus on projecting those strengths of citizen airmen where they will most benefit the continued security of our nation and its interests.” The Air Force’s new vice chief of staff, Gen. Larry Spencer (see below), officiated the ceremony. Jackson, a 1978 Air Force Academy graduate, succeeded Lt. Gen. Charles Stenner, who led the Reserve component since June 2008 and retired from the Air Force with 39 years of military service after the change of command, according to a Robins release. Jackson pinned on his third star prior to taking command. From May 2010, he served as deputy to the AFR chief. In his new roles, Jackson serves as the principal adviser on Reserve matters to the Air Force Chief of Staff and supervises some 71,400 Reservists.