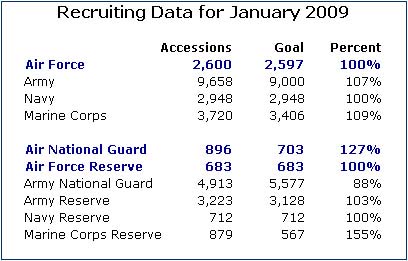 y heading progressively toward the tank, recruiting for the military services and reserve components remains good. All the services and reserve components, save one—the Army National Guard—met or exceeded, in some cases far exceeded, their goals for the month of January, according to the latest data released by the Pentagon. Even the Army Guard, which reached only 88 percent of its goal of almost 5,600 soldiers last month, is OK for the fiscal year, having already banked about 14 percent over its annual goal. Of the Total Air Force, the Air National Guard, once again, led the pack, bringing in 127 percent of its goal of 703 new recruits. The active Air Force and Air Force Reserve Command both met their goals for the fourth month of the fiscal year.