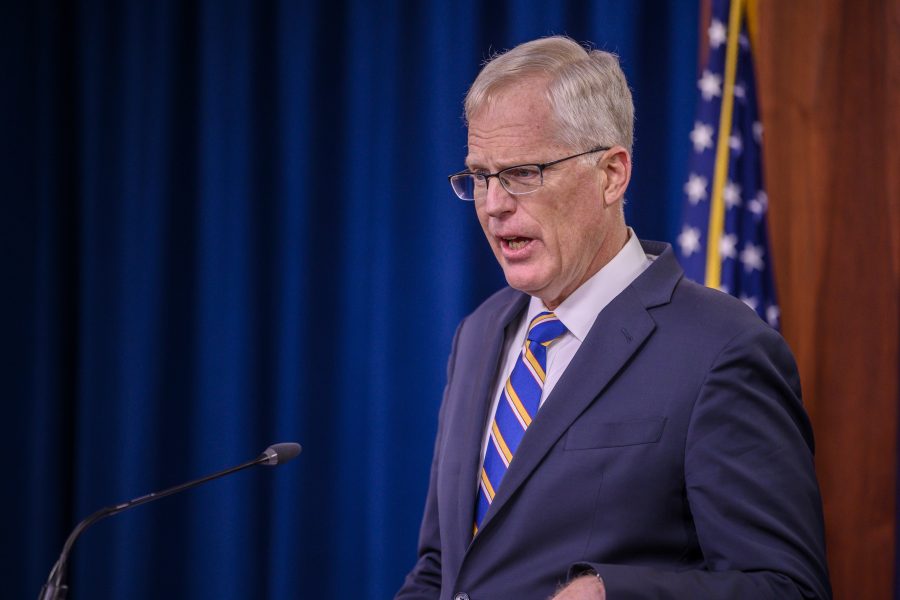 The Pentagon on Nov. 17 formally announced the plan to withdraw thousands of forces from Afghanistan and Iraq, just two months before President Donald J. Trump is expected to leave office.

Acting Defense Secretary Christopher C. Miller, who has been in the role for eight days, announced the plan in brief remarks at the Pentagon, saying withdrawing about half of the forces from Afghanistan and removing 500 troops from Iraq is the “next phase of the campaign to defeat terrorists,” which has lasted almost 20 years.

“This is consistent with our established plans and strategic objectives supported by the American people, and does not equate to a change in U.S. policy or objectives,” Miller said. “Moreover, this decision by the President is based on continuous engagement with his national security cabinet over the past several months, including ongoing discussions with me and my colleagues across the United States government. I have also spoken with our military commanders, and we all will execute this repositioning in a way that protects our fighting men and women, our partners in the intelligence community and diplomatic corps, and our superb allies that are critical to rebuilding Afghan and Iraqi security capabilities and civil society for lasting peace and troubled lands.”

The forces are expected to leave by Jan. 15, 2021, though defense officials would not provide details on the specific timeline or which forces would leave. A senior defense official, speaking to reporters on background shortly before the plan was announced, said the Pentagon believes the remaining number of troops would be enough to “accomplish everything we have been doing. There’s no need to keep a force posture of over 4,000.” The reduction will not completely eliminate U.S. capabilities in the country, though the official would not say whether the plan will impact the U.S. military’s ability to conduct airstrikes in support of Afghan forces.

The official also would not speculate on a timeline for withdrawing the rest of the forces. National Security Adviser Robert O’Brien, speaking at the White House shortly after Miller’s speech, said it is Trump’s goal that all troops will return by May, but “right now that policy is not known.” The troops that will remain after January will defend embassies, protect diplomats, and “deter our foes.”

Despite warnings from previous Defense Secretary Mark T. Esper and an independent watchdog assessment that said Taliban violence has risen and that the group has not broken from al-Qaida, defense officials said conditions for withdrawal have been met. The official noted these metrics of violence are just one part of the assessment. In discussions with senior military officials and other advisers, Trump decided that “first and foremost” the U.S. national security would not be threatened by withdrawing troops, and the remaining force posture is enough to carry out the mission with allies.

Miller said he spent the morning reaching out to allies, including NATO, along with Afghan and Iraqi leaders to update them on the plan. He also visited with several Congressional leaders to let them know of the withdrawal.

NATO Secretary-General Jens Stoltenberg, in a Nov. 17 statement released before the plan was announced, warned of the implications of a premature withdrawal, saying Afghanistan could once again become a platform for terrorists to organize attacks. Stoltenberg also noted that the Islamic State group still has the potential to remake its so-called caliphate in Iraq and Syria.

“The price for leaving too soon or in an uncoordinated way could be very high. … When the time is right, we should leave together,” said Stoltenberg, according to CNN.

The news received mixed reactions on Capitol Hill from both sides of the aisle.  Senate Majority Leader Mitch McConnell (R-Ky.) said Nov. 16 that a “rapid withdrawal from Afghanistan now would hurt our allies and delight the people who wish us harm,” according to Politico.

HASC Ranking Member Rep. Mac Thornberry (R-Texas) said he does “not know of any condition that justifies reducing further the troops that we have in Afghanistan. As a matter of fact, I think it undercuts the negotiations to say whatever you do or don’t do, we’re going to reduce our troops even further.”

Senate Armed Services Committee Chairman Sen. Jim Inhofe (R-Okla.) said, “we must ensure that our strategy and posture reflect the conditions on the ground,” adding that he looks forward to detailed briefings on the move. House Armed Services Committee Chairman Rep. Adam Smith (D-Wash.) said it is the “right policy decision” as long as it is done “responsibly and carefully executed to ensure stability in the region.”