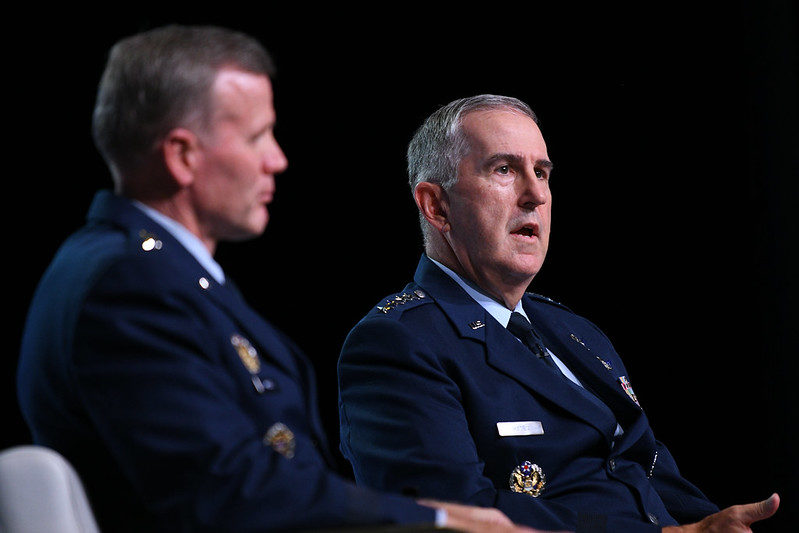 “Russia today is a significant threat that we have to deter each and every day,” Hyten told Air Force Magazine after a panel discussion alongside Wolters at AFA’s Air, Space & Cyber Conference in National Harbor, Md.

“Russia is the significant nuclear power in the world. They have more nuclear weapons than any other nation in the word—that includes us,” he said, stressing the threat posed by Russia’s low-yield tactical nuclear weapons. “Russia is a significant threat, and the new novel capabilities they’re developing are concerning.”

Wolters, who is dual-hatted as head of U.S. European Command, spoke of the need for a whole of government American response to adversaries.

“The enemies against us in all corners have figured something out. It’s this thing called the gray zone,” he said, alternately referring to the threshold below open conflict as the “competition” or “deterrence” phase.

“In the 21st century, against just about any nation state actor that constitutes a threat, if you start out and you neglect any of the domains, you’ll lose, because they’re using it,” he said.

Hyten said as chair of the Joint Requirements Oversight Council, it is his responsibility to identify new joint military requirements based on advances in technology and new concepts of operation.

“The joint requirement is going to be a critical piece of the puzzle, and it’s as simple as that. But holy cow, the execution is complicated,” he said.

“China is the pacing threat because they’re moving faster than everybody,” he said.

“We better wake up and get out of our own way, remove some of the bureaucracy, allow you, the people in here, to do the work they need to do,” Hyten told a full conference room of Airmen, Guardians, and members of the defense industry at the conference’s capstone event.

“The biggest threat that I worry about is us,” he said. “Because we move slow. We are deliberate. We don’t take risk anymore. We are risk averse. It takes us two years to do an experiment, then two years to build a requirement, and two years to get a budget, and 10 years to build a program that is supposed to last for 15 or 20 years. And in the meantime, somebody like China has built four different capabilities all to do the same thing. And they’re moving unbelievably fast.”