Hurricane Hunter dedicated as Spirit of Keesler: The 403 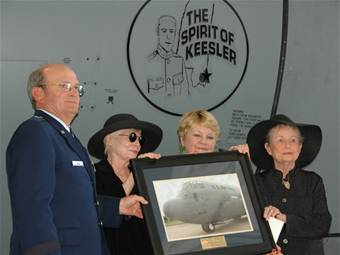 rd Wing, an Air Force Reserve Command unit at Keesler AFB, Miss., dedicated one of its WC-130J weather-monitoring aircraft as the Spirit of Keesler during a ceremony April 22 at the base. The airplane was named in honor of 2nd Lt. Samuel Keesler Jr., for whom the base is also named. He was an aerial observer in World War I who won the Distinguished Service Cross posthumously for his gallantry. “We get to take the name of Lieutenant Keesler everywhere throughout the world and wherever it goes, people will see it and know we remember who made us what we are today,” said Brig. Gen. Richard Moss, the wing’s commander, who presided over the event. About a dozen members of the Keesler family attended the ceremony and three of his nieces helped unveil his portrait on the fuselage of the Spirit of Keesler. The Spirit of Keesler has already flown 2,677 hours, including into hurricanes Dennis, Rita, Emily, and Paul, the South Mississippi’s Herald Sun reported April 23.