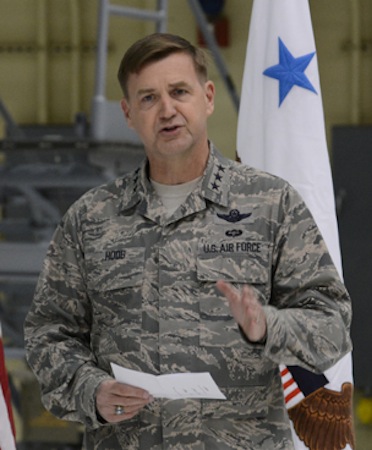 President Obama nominated Lt. Gen. Stephen Hoog to be the Air Force’s assistant vice chief of staff, announced the Pentagon on Thursday. He would replace Lt. Gen. Frank Gorenc, who has been in this role since April 2012. As assistant vice chief, Hoog would also be the Air Staff’s director. Hoog has been serving since November 2011 at JB Elmendorf-Richardson, Alaska, as commander of NORAD’s Alaskan Region as well as 11th Air Force boss and head of US Pacific Command’s Alaskan Command. Also on May 30, the Pentagon announced that the President tapped Lt. Gen. Brooks Bash to be Air Mobility Command’s vice commander. Bash has been the Joint Staff’s director of logistics since September 2011. He would replace Lt. Gen. Robert Allardice, who’s held the post since September 2011. Allardice is set to retire from the Air Force in September after more than 32 years in uniform.