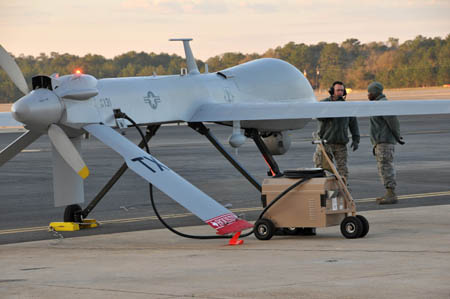 An MQ-1B Predator of the Texas Air National Guard’s 147th Reconnaissance Wing recently flew the first sortie from the unit’s newly assigned operating location on Ft. Polk Army Airfield, La. Since the wing relinquished its F-16 flying mission in 2008, “we have been eagerly awaiting the day we flew our first local sortie in the MQ-1,” said Col. Kurt Leslie, 147th Maintenance Group commander. According to wing officials, current FAA flight restrictions governing remotely piloted aircraft prevent the unit from operating from its home station at Ellington Field JRB, Tex., outside of Houston. Therefore, the wing set up shop in an Army hangar at Ft. Polk, moving ground control stations, antennas, and support infrastructure. This made the first sortie from there possible on Feb. 6. Ft. Polk is home to the Joint Readiness Training Center. Flying from there will allow the Air Guard to train directly with Army units rotating through pre-deployment training, said wing officials. (Ft. Polk report by MSgt. Dale Hanson)