Historic View from the Cockpit 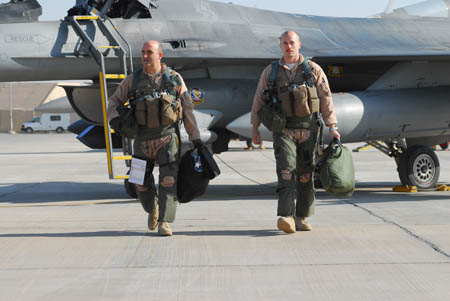 F-16 pilots flew the final US manned combat mission over Iraq, protecting the last US military ground convoy until it passed through the gates at Khabari crossing on the Iraqi-Kuwaiti border, thereby completing the US military’s phased Iraq withdrawal. Both pilots sensed the historical significance of their mission while they were still in the air on Dec 18. “Seeing the last vehicle cross the border, and watching them actually shut the gate in my targeting pod” was “the first realization,” said one of the pilots, Col. Rodney Petithomme, 332nd Expeditionary Operations Group commander. He continued, “The second was talking to command and control and having them tell us, ‘You are the last manned US Air Force aircraft in Iraq. You are cleared to return to base.'” The second pilot, Lt. Col. Jason Plourde, 79th Expeditionary Fighter Squadron commander, added, “When they spoke those words is really when [the significance] set in.” While Plourde and Petithomme flew the last US manned combat aircraft in Iraqi airspace that day, MQ-1 Predator remotely piloted aircraft operating that same day were actually the last combat aircraft to leave Iraqi airspace. (332nd AEW report by 1st Lt. Rusty Ridley)