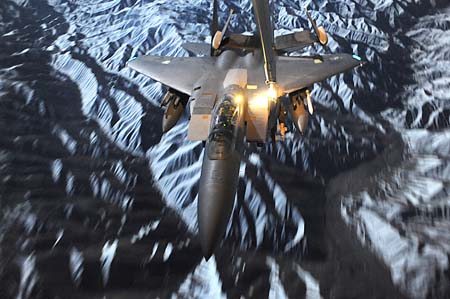 0 airmen and 20 F-15E Strike Eagles deployed from the 366th Fighter Wing Gunfighters at Mountain Home AFB, Idaho, to Afghanistan since August 2008 will be returning soon. During their deployment, airmen of Mountain Home’s 391st Fighter Squadron, known as the Bold Tigers, flew more than 1,700 combat missions, providing close air support for US and coalition ground troops engaged in Operation Enduring Freedom. Over the course of about 7,000 flying hours, the squadron delivered more than 131,000 pounds of ordnance, directly saving the lives of coalition ground forces on numerous occasions, according to squadron leaders. “I could not be more proud of this squadron,” said Lt. Col. Dan Orcutt, 391st FS commander. He added: “I will never forget watching our aircrews shake hands with US Army and coalition soldiers who stopped by the squadron to say, ‘Thank you for saving our lives.’ Their visits symbolized the importance of our mission, and it was an honor to hear their stories and show them our jets.” Orcutt also praised the “world-class” maintainers who enabled the heavily engaged unit to fly “more hours in four months than we normally fly in a year. … We did not miss a single sortie for maintenance.” (366th FW report)

The Department of Defense announced a contract for future cloud services. The effort, Joint Warfighting Cloud Capability (JWCC), will serve as a pillars of the U.S. military's future operations, with a top line of $9 billion. It will provide the DOD with enterprise, global cloud services across all security and…