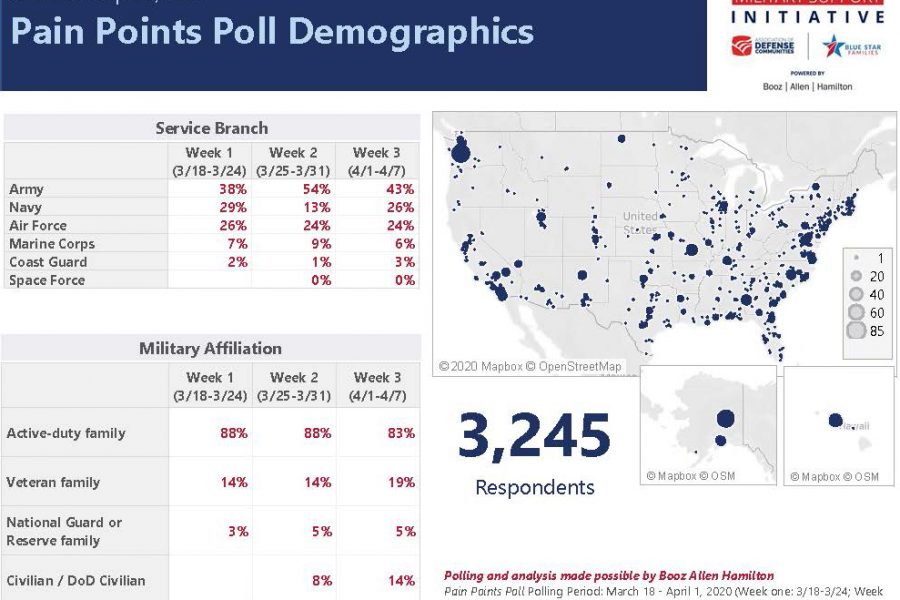 Guard Members, Spouses: Sound Off on How You’re Coping with COVID-19

The COVID-19 Military Support Initiative—a joint program of the military nonprofits Blue Star Families and Association of Defense Communities—recently launched a poll to determine the biggest challenges the new coronavirus pandemic is posing to U.S. troops, veterans, their families, and their communities.

But the head of Blue Star Families said CMSI needs National Guard members and their families to sound off on their experiences, since they’re underrepresented in the survey so far.

“We’re collecting information on what in real time America’s military families, the servicemembers, and their families, [are] experiencing right now,” said Kathy Roth-Douquet, CEO, co-founder, and board president at Blue Star Families, during an April 16 CMSI virtual town hall about supporting the Guard during the pandemic. “Unfortunately, we have really good participation with the Active duty, [but] not enough information from the National Guard to report out.”

CMSI’s COVID Military Families Pain Points Poll looks to capture a dynamic picture of how its target demographics are coping with the outbreak. However, any individual aged 18 or over may take the survey, whether or not they’re military-affiliated.

“This poll is more than a one-time survey,” the website states. “The questions and topics update weekly to reflect the changing needs of those impacted by COVID-19.”

The initiative’s website encourages respondents to retake the poll as many times as their “situation shifts,” and notes that its real-time nature lets CMSI “alert military, government, and nonprofit leaders to challenges as they arise in the weeks and months to come.”

A total of 3,245 individuals had taken part in the poll as of April 7, Jennifer Akin, senior evaluation manager at Blue Star Families, told Air Force Magazine on April 16. However, she noted, only four percent of those respondents self-identified as members of National Guard or Reserve families (a category that she said includes reserve component members and their spouses).

The survey’s findings are rolled-up on a weekly basis.

During Week 3 of the poll, which spanned April 1-7, challenges encountered by respondents included (but were not limited to):