Skip to content
Airman 1st Class Ryan Girouex, 60th Civil Engineer Squadron firefighter, center, extinguishes a fire on a shed on Soaring Eagle Trail in Vacaville, Calif., on Aug. 20, 2020. The 60th CES loaned 28 personnel and five trucks to aid in the fight against the LNU Lightning Complex Fire, a cluster of fires that forced tens of thousands of people to evacuate their homes. Air Force photo by Nicholas Pilch.
Expand Photo 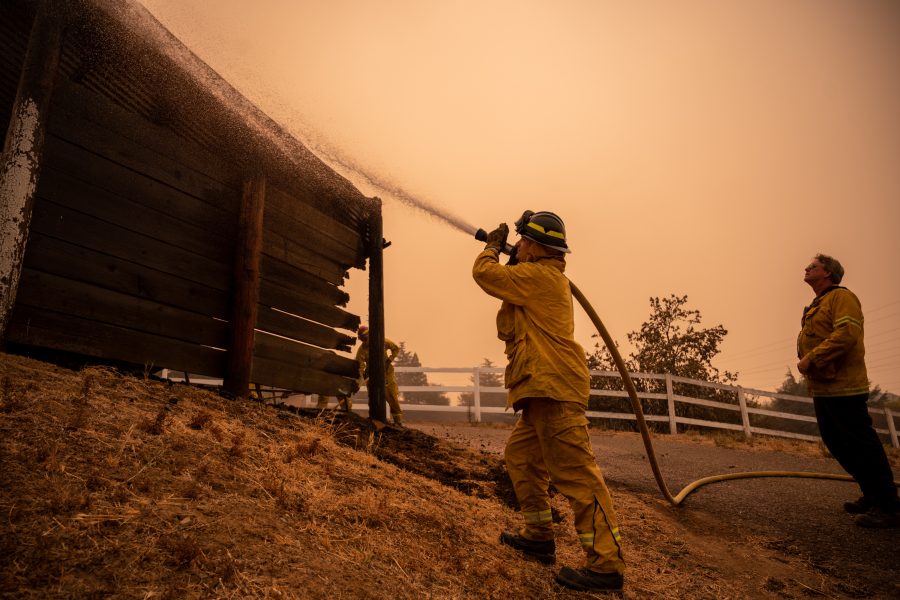 Air National Guard reconnaissance aircraft are tracking the spread of record fires across California, with unmanned and manned aircraft providing video to help with the response.

There are more than two dozen major fires and lightning complexes across the state, with 615 total wildfires ignited since Aug. 15. All told, about 1.3 million acres have burned across California, according to Cal Fire.

The California Air National Guard’s 195th Wing’s 234th Intelligence Squadron is using video feeds from MQ-9s and at least one RC-26 that have been flying above the fires, as well as damage assessments and predictive analysis to inform crews on the ground, according to a 195th Wing release. The MQ-9s and RC-26 are in addition to specially equipped Guard and Reserve C-130s that have been flying daily, dropping fire retardant on fire lines across the state.

Airmen in the squadron’s processing, assessment, and dissemination cell compare the live video feed from the aircraft to Google Earth and satellite imagery to report the extent of the damage almost instantly.

“Through predictive analysis, we can take into consideration the weather, wind patterns and terrain to determine how quickly a fire may encroach upon a nearby city,” Technical Sgt. Matthew Rubio, the PAD cell team lead, said in the release. “This information we provide allows the incident commanders to make decisions that can save life and property.”

The biggest of the state’s blazes is the LNU Lightning Complex Fire, which has burned 352,913 acres and was about 27 percent contained as of Aug. 25. The fire forced Travis Air Force Base to evacuate aircraft and personnel, though the base returned to normal operations on Aug. 24. Airmen from the base’s 60th Civil Engineer Squadron activated to assist nearby firefighters to battle the blaze.

As of Aug. 24, the California National Guard had deployed more than 660 members to help fight fires across the state, including engineers who have built bridges to help emergency responders, according to a release.