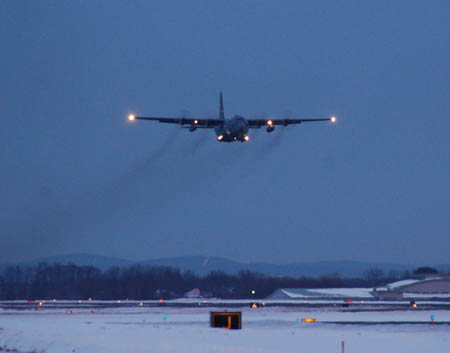 Members of the Connecticut Air National Guard’s 103rd Airlift Wing in East Granby launched the first locally generated sortie with one of the unit’s newly assigned C-130H transports, according to a unit release. A local aircrew, augmented by New York Air Guardsmen and other airmen, took off on Dec. 19 from the wing’s home at Bradley ANG Base on the historic mission, states the Jan. 4 release. “It was very exciting to be a part of the first local launch,” said SMSgt. Bill Westling, a flight engineer assigned to Bradley’s 118th Airlift Squadron. “From the preflight to takeoff without any hiccups is a testament to the team effort from maintenance and ops,” he said. The wing received the first of its eight C-130Hs in October and is still building up to its full complement of airplanes and its airmen are still training for the new mission. The wing formerly operated C-21A jets. (East Granby report by Maj. Bryon Turner)