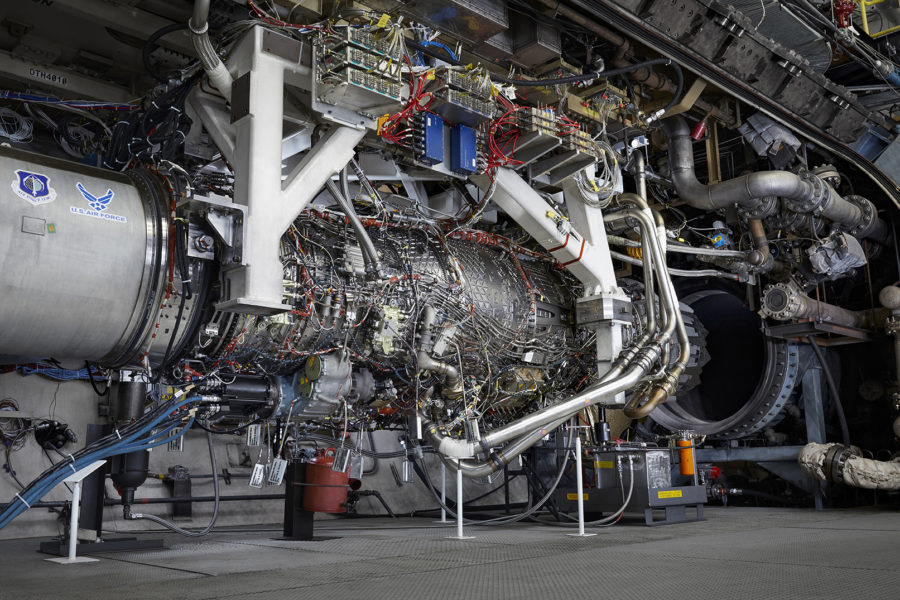 In 1941, Gen. Henry H. “Hap” Arnold of the then-U.S. Army Air Corps, personally reviewed a jet engine patented by Sir Frank Whittle flying on a Gloster E.28/39 aircraft. Impressed by its design, Arnold arranged for a Whittle engine to be brought back to the U.S. and tasked General Electric (GE), known for its work on turbosuperchargers, to use the Whittle design as the foundation for developing the first U.S. jet engine. Arnold’s request for a new jet engine launched a partnership that continues today, with the ongoing development of GE’s XA100 designed for the F-35, along with thousands of GE engines that power the current Air Force fleet.

“The primary challenge of the day was that engines lose power at higher altitudes where air density decreases,” said Darin DiTommaso, vice president of engineering for GE Edison Works, GE’s advanced military products organization. “GE had developed a turbosupercharger that demonstrated the ability to reduce the amount of power loss at higher altitudes, so the U.S. Army Air Corps selected GE to develop an engine we called the I-A.”

At the time, GE’s development of the I-A engine was a secret program. So secret, in fact, that the engineers tasked with the project became known at GE’s Lynn, Mass., plant as the “Hush-Hush Boys.” The engineers succeeded, as the I-A engine first ran on April 18, 1942, and flew six months later in October 1942, powering the Bell XP-59.

The rapid development of the I-A engine put GE on its trajectory to becoming a world leader in jet propulsion technology. The investments made into the I-A’s research and development laid the foundation for the future success of several engines, including the J47, the world’s most-produced engine.

“Jet engine development is one thing, but it’s another to mass produce it on a regular basis,” DiTommaso said. “We developed a supply chain and cultivated the relationship between our engineering and manufacturing organizations, enabling the J47 program to produce more than 35,000 engines, primarily for the F-86 and B-47.”

By 1959, GE’s J85 engine powered the first flights of the T-38 trainer, an aircraft that remains in service today. Another GE engine, the J79, famously powered the F-4 Phantom for the Air Force, a handful of which still fly today internationally.

“That longevity validates the quality of the J85 and J79 designs, which reflects on the quality of our engineers, product support team, supply chain, and operators on the manufacturing and assembly lines,” said DiTommaso. “Technology continually improves, and key deliverables and requirements change. We’ve adapted our designs as requirements asked for much more fuel efficiency and thrust, but the true value of an engine like the J85 is really in its simplicity and low cost.”

GE further benefited from its participation in the 10-year “Great Engine War” competition with Pratt & Whitney from 1984-1994.

“Competition forces you to collaborate with the customer in order to fully meet their needs across a variety of challenging requirements,” DiTommaso said. “As a manufacturer, you have to listen to the customer—in this case the Air Force—to deliver what they want at the time they want it. Our collaborative relationship builds trust so that when things don’t always go perfectly, you can still work through issues together.”

The trust developed between GE and the Air Force directly empowers pilot success in major military air campaigns, such as Operation Desert Storm.

“About 80 percent of the U.S. and Allied aircraft in Operation Desert Storm were powered by GE, more than 5,000 engines in all,” DiTommaso said. “We supported the F-16s, F-117s, F-18s, A-10s, Blackhawks, and Apaches as well as military transports. No matter the aircraft, our goal is for the pilot to never have to think about the engine so they can focus on their mission.”

GE is continuing that mission today, innovating to develop the world’s first-ever flight-weight three stream adaptive cycle engine—the XA100—to bring next generation technology to the cornerstone of the Air Force fleet, the F-35.

“The Air Force expressed the need for better fuel efficiency, more thrust and thermal management, and the XA100 delivers, bringing 25 percent better fuel efficiency, 10 percent more thrust, and twice the thermal management capability,” DiTommaso said. “The first engine-to-test campaign is complete and we’re now in the second phase of our second engine-to-test campaign at Arnold Engineering Development Complex. We’re very pleased with how it’s performing and looking forward to an opportunity to bring that capability to the field.”

DiTommaso is confident that GE’s military business, because of the relationship it has cultivated with the Air Force over its 75-year history, will continue to flourish into the future.

“Our relationship with the Air Force is built on a series of successes and close collaboration,” DiTommaso said. “Today, GE and its joint venture partners power around 40 percent of U.S. Air Force aircraft, and we continue to be a key strategic partner in improving their existing fleet’s sustainment and readiness. We’re going to continue listening, collaborating, and delivering innovative technologies and products that will keep our Air Force leading the world. GE is honored to play our part and looking forward the next 75 years.”

In its 75-year history, 22 Airmen have led the Air Force as Chief of Staff. Each came to the post shaped by the experiences—and sometimes scar tissue—developed over three decades of service. Each inherited an Air Force formed by the decisions of those who came before, who bequeathed to posterity the…

As part of Air Force Magazine’s commemoration of the Air Force’s 75th anniversary, Sept. 18, 2022, we set out to interview former Chiefs of Staff. Today we feature CSAF No. 17 Gen. John P. Jumper.

As part of Air & Space Forces Magazine’s commemoration of the Air Force’s 75th anniversary, Sept. 18, 2022, we set out to interview all of the living former Chiefs of Staff, ultimately interviewing Chiefs from 1990 to the present. Today we feature CSAF No. 16 Gen. Michael E. Ryan.