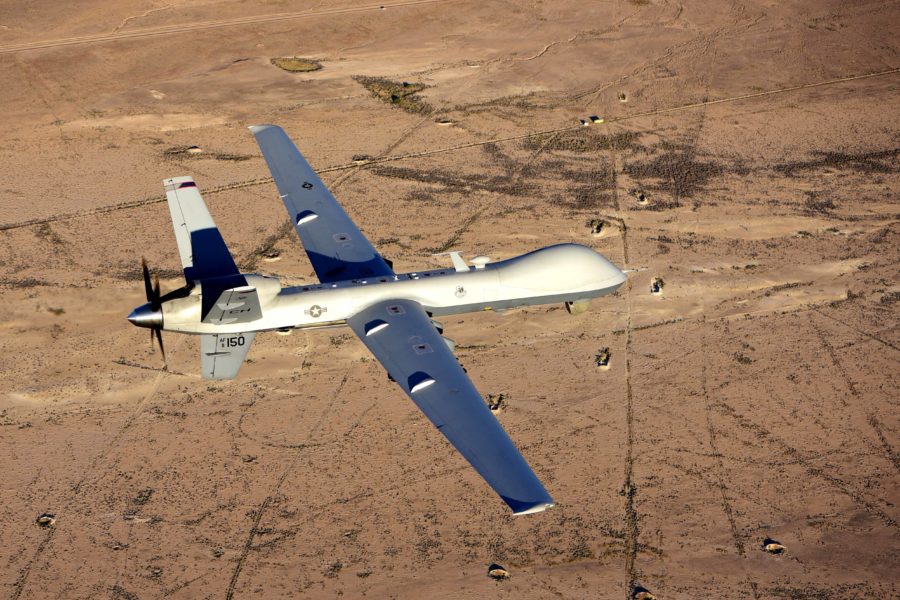 One extraordinary thing about the U.S. Air Force’s unmanned aircraft revolution was that it almost didn’t happen.

True believers couldn’t always make others see the vision, and had to overcome “opposition from many in the service,” as retired Gen. John Jumper, a former chief of staff, told Congress earlier this year. Once the Air Force committed in the mid-1990s to the RQ-1 Predator, there were challenges.

“Introduction into the Air Force was not easy,” Jumper said.

But the service remained committed, and so did the aerospace pioneers at General Atomics Aeronautical Systems, Inc., builder of the aircraft. Together they forged a partnership that went on to change warfare forever.

Initially, Air Force leaders focused on enhanced reconnaissance: With no human crew on board, the Predator could stay on station, orbiting areas of interest for many hours longer than conventional combat aircraft.

Commanders quickly warmed to the quantity and quality of real-time situational awareness these unmanned systems produced, more than had ever before been possible. During the air war over Kosovo in 1999, for example, officers were able to watch a Yugoslav target before, during, and after it was struck by munitions dropped from a B-52, as Air Force Magazine described. Commanders could conduct immediate bomb damage assessments from their op center.

Soon the issues shifted to new questions: How best to use a Predator’s view of a target to cue a strike aircraft quickly; how to operate the aircraft at greater distances via satellite; how to upgrade what the aircraft could do itself with its own sensors and—maybe someday—even its own weapons.

Those problems were solved.

“We were done crawling. We were walking, and we were getting ready to run,” says Dave Alexander, president of GA-ASI, who as a company aerospace engineer at the time was a central part of the process. “We knew then how much more this platform could deliver and we stayed focused in supporting the Air Force in getting it there.”

That phase of the story has passed into lore along with the names of leaders like Jumper; his predecessor as Chief of Staff Gen. Michael Ryan; retired Col. James “Snake” Clark, who later headed intelligence, surveillance, and reconnaissance innovations as a civilian—and the team at Air Force Materiel Command’s Big Safari office, led by William Grimes. Once they and other Air Force leaders saw the Predator in action in the Balkans, they knew what unmanned systems could do in future applications.

Teeth of the Predator

The Air Force, GA-ASI and its partners began addressing the needs: the Predator got better sensors and a laser designator so that it could spotlight targets for armed aircraft to strike with precision-guided munitions. Then it got weapons of its own: a pair of AGM-114 Hellfire anti-tank missiles. All that work was well underway by Sept. 11, 2001, when the use case for armed UAS stopped being theoretical.

Suddenly American officials needed more, ever more, sustained, high-quality intelligence about activities on the ground in Afghanistan, which sheltered the al Qaeda conspirators of the 9/11 terrorist attacks. And U.S. counterterrorism strategy began to rely heavily on the ability to find, pursue, and eliminate individual terrorists or small groups, knitting together all sources of intelligence available and then relying on the Predator to conclude the operation.

The aircraft, the Air Force and other U.S. government teams that operated it had their rendezvous with destiny. The Predator changed the battlefield in Afghanistan, and later Iraq and elsewhere. It became an icon, nominated as the one of the top 10 aircraft that changed the world. One important early aircraft hangs in the National Air and Space Museum and another Predator is on display at the National Museum of the United States Air Force.

Before long, GA-ASI and the Air Force both recognized that the success of the Predator also revealed its limits. So even as GA-ASI workers were proving out and perfecting the Predator’s capabilities, they also developed a larger, more capable successor: the MQ-9A Reaper.

Nine feet longer than the Predator and with a wingspan 11 feet greater, the Reaper’s take-off weight is 12,000 pounds, more than 4.5 times that of the earlier aircraft. Along with that, its speed, altitude, endurance, and payload are likewise greater, and its a Honeywell-built turboprop engine gives it the voice and power of a modern aircraft.

“Reaper defined what medium-altitude, long-endurance ISR could be, based on what the Air Force and the joint force needed,” Alexander says. “It still does, and it will for a long time.”

Hardware, software and other innovations only have grown as well, company officials say. In partnership with the Air Force, GA-ASI is redrafting the very same UAS handbook they wrote together with new practices that will transform military operations and air dominance again.

One example is with artificial intelligence and autonomy, and a new generation of aircraft that will do much of their work on their own, without constant, real-time attention by human pilots.

“We won’t need stick-and-throttle flying anymore unless we want it, and we won’t need to have human eyeballs watching the sensor feed every minute,” says Patrick Shortsleeve, a retired Air Force colonel who served as a director of intelligence at NATO and director of ISR operations for coalition forces in Afghanistan. Shortsleeve now works as GA-ASI’s vice president for DoD strategic development.

“You’ll push a button,” he says, “the airplane will take off and fly its mission, and if it sees something interesting it’ll tap you on the shoulder and say, ‘Hey, take a look at this.’”

Shortsleeve refers to this as a form of “supervised autonomy” – humans in command, but at a layer above unmanned systems working independently or collectively to perform ISR or support other operations. The aircraft could sortie in autonomous-only flights or team with crewed aircraft. In addition to ISR roles, future uncrewed systems might be the lead element in a fighter sweep, or defend tankers, early warning platforms, or larger surveillance aircraft.

Autonomy promises to reduce personnel costs and eliminate dependence on datalinks that adversaries try to jam and hack. With resilient new networks and other novel capabilities, the aircraft can fly, work, and burst-communicate only when needed.

The partnership between the Air Force and GA-ASI will continue to make history, Alexander vows.

“Supporting the women and men of the U.S. Air Force is our honor,” he says. “And we’re just getting started.”