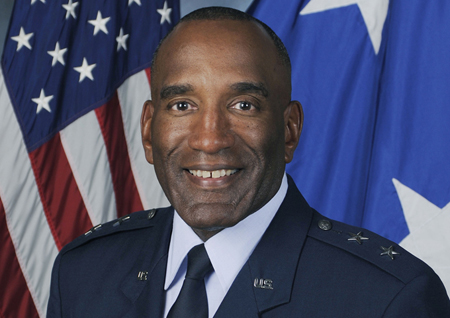 Maj. Gen. Alfred Stewart, who led the Air Force Personnel Center from August 2010 to August 2013, died on March 9 after a battle with brain cancer, according to an Air Force release. Stewart, who graduated from the Air Force Academy in 1981, was a command pilot with more than 3,000 hours flying the KC-135, T-1, and C-17. He served in a variety of leadership roles in his more than 32 years of service, including as the head of the Air Force Recruiting Service. Stewart documented his unexpected battle with cancer in an Air Force commentary titled, “Never saw this coming: Lessons learned in trying times,” which was posted almost exactly two years ago after he learned about the golf ball sized tumor on his brain. He urged airmen to remain fit, strong, and healthy every day, noting that fitness is “not just passing the Air Force fitness test . . . it is about saving your life.” He wrote that, “Life is short and precious” and encouraged airmen not to push off their dreams. “‘One day’ and ‘someday’ may never come. Push yourself to do more, now. Tomorrow is not promised, so do not waste a day,” he wrote.