First Time Out in Hogs 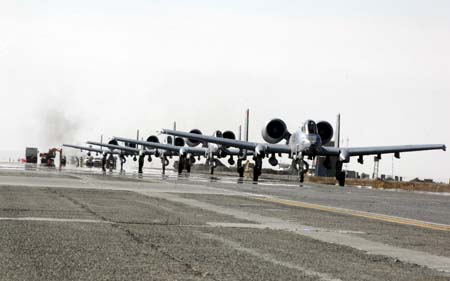 Airmen of the Arkansas Air National Guard’s 188th Fighter Wing are on their first deployment with A-10s since the wing switched in April 2007 from the F-16. The 188th FW has sent some 50 airmen initially to Afghanistan to work with the Maryland ANG’s 175th Wing’s A-10C force as the 104th Expeditionary Fighter Squadron at Kandahar Airfield, replacing the 354th EFS, which flew more than 2,500 sorties over six months. Another 250 airmen from the 188th FW will deploy in March, for the second half of the shared rotation. Col. Tom Anderson, 188th FW commander, believes the wing has “received the best training possible” recently in the desert and mountainous environment around Davis-Monthan AFB, Ariz., and through Green Flag, a close air support exercise at Nellis AFB, Nev. He added, “We’ve been to war before and deployed airmen into battle, just in a different aircraft.” (188th FW report by Capt. Heath Allen; Kandahar report by SSgt. Angelique Smythe)