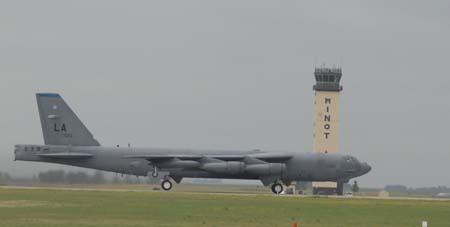 r Force has sent the first of 18 B-52 bombers that it intends to “retire” to Davis-Monthan AFB, Ariz., where it is to be stored in case it’s needed again, according to a July 30 release, which noted it was the first H model the service has decommissioned. It entered service in 1961 with the 2nd Bomb Wing at Barksdale AFB, La., but because Barksdale had “parking shortages,” the 2nd BW had shunted the venerable bomber off to Minot AFB, N.D., which had more space available. Air Combat Command plans to take the B-52 force down to 76 aircraft, so 17 more H models will join #LA1023 at Davis-Monthan over the next few months. According to the Minot release, ACC will take an equal number from Barksdale and Minot, sending one every two weeks into recallable storage. “The decision to pick the selected aircraft was based on a number of criteria that looked at the aircraft as a whole,” said Lt. Col. Bill Stahl, deputy commander of the 5th Bomb Wing at Minot, and added, “It’s not like the aircraft are all rusted or corroded; it’s just that the selected 18 are not as airworthy as the first 76.” Under its current strategy, ACC plans to activate a second operational B-52 bomber squadron at Minot. (Minot report by A1C Benjamin Stratton)