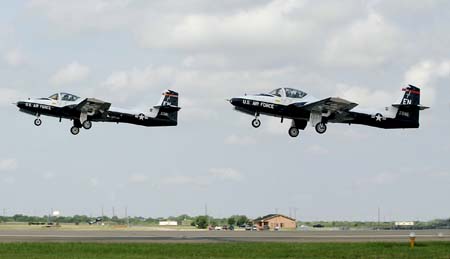 the T-37 Tweet trainer aircraft from service during a ceremony on July 31 at Sheppard AFB, Tex. It had served for more than 50 years in undergraduate pilot training roles, providing initial jet training for more than 78,000 Air Force and allied pilots. “Combat skill and success doesn’t happen overnight and it certainly doesn’t start without disciplined training,” said Col. Kevin Schneider, commander of Sheppard’s 80th Flying Training Wing, the last unit to operate the T-37. He added, “The T-37 Tweet has been that starting point for pilots for more than 50 years.” Gen. Donald Hoffman, commander of Air Force Materiel Command, who once was a T-37 instructor pilot, called the T-37 a “wonderful aircraft,” during his speech at the ceremony. Hoffman was one of the pilots who flew four of Sheppard’s remaining Tweets to the Aerospace Maintenance and Regeneration Group at Davis-Monthan AFB, Ariz., after the ceremony for placement in storage. Sheppard’s three other remaining T-37s were taken to the Utah Test and Training Range at Hill AFB, Utah, for their final resting place. The T-6A Texan II trainer aircraft replaces the Tweet. (Sheppard report by John Ingle)