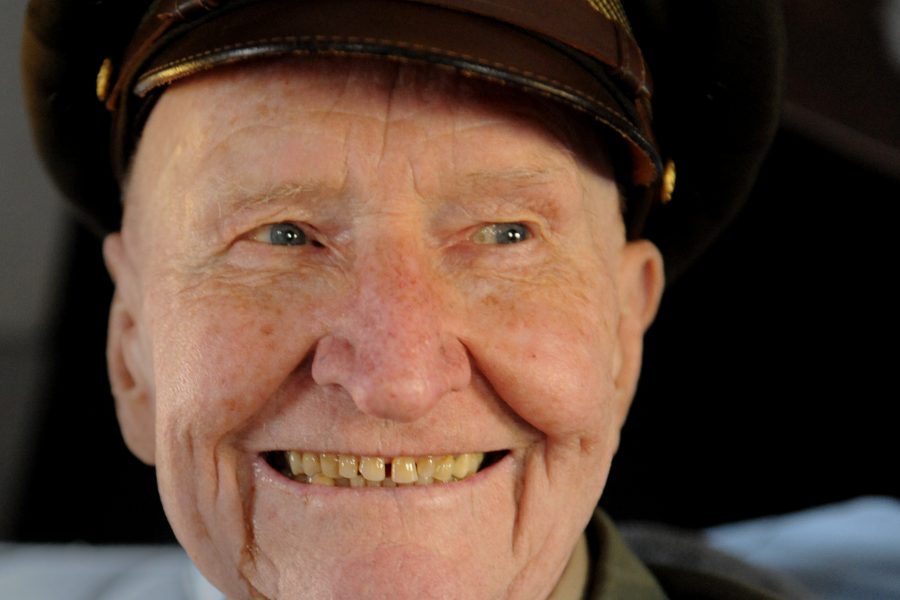 Col. Gail S. Halvorsen, who came to fame as the “Candy Bomber” of the Berlin Airlift, earning international goodwill for the United States and the Air Force, and who worked on Air Force space projects such as the Titan III, X-20 Dyna-Soar, and Manned Orbiting Laboratory, died Feb. 16 at the age of 101.

Halvorsen grew up in Utah and earned a private pilot’s license at the age of 21, when he joined the Civil Air Patrol. Following the outbreak of WWII, Halvorsen joined the Army Air Forces and flew ferry flights of C-46s and C-47s in the South Atlantic theater of operations.

He stayed in the Air Force after the war and in July 1948 was assigned as one of the pilots in the Berlin Airlift, flying C-54s and C-47s into Tempelhof Airport with crucial sustenance for the citizens of divided Berlin, who were cut off from land resupply by a Soviet blockade. On a sightseeing tour of Berlin during time off, he saw children watching the cargo aircraft operation. Talking to them, he was touched by their appreciation for the airlift and one’s comment that “when the weather gets bad, don’t worry about us. We can get by on little food, but if we lose our freedom, we may never get it back.” He offered them a few sticks of gum, which 30 children shared eagerly but politely. He resolved to do more, and promised to drop candy to them from his plane the next day. He would “wiggle” his wings to let them know which plane to watch for.

Starting with candy rations pooled with friends, Halvorsen devised small parachutes made from handkerchiefs, so the falling candy parcels wouldn’t hurt the children waiting below. For three weeks, he made candy drops once a week. As the weeks passed, the number of children waiting below grew.

The commander of “Operation Vittles,” as the Berlin Airlift was called, was Lt. Gen. William H. Tunner. When he found out about Halvorsen’s unauthorized airdrops, he approved and ordered them expanded as Operation “Little Vittles.” Soon Halvorsen’s whole squadron was buying candy and gum and assembling the parcels with small parachutes. As word reached the U.S. of the mini-airlift, American schoolchildren and confectionary companies donated candy, and soon many other pilots were making candy drops as well. Halvorsen became known as “Uncle Wiggly Wings” or “The Chocolate Flier,” among other names, by the children of Berlin, and the “Candy Bomber” in the U.S.

“Little Vittles” continued from September 1948 through May 1949, when the Soviet Union lifted its blockade and the larger airlift ended. Halvorsen had rotated home in January 1949, but the operation was taken up by his squadron mate, Capt. Lawrence Caskey. “Little Vittles” had dropped an estimated 46,000 pounds of candy tied with more than 250,000 parachutes, and Halvorsen received international attention for his efforts. In his autobiography, Halvorsen recalled that a Berlin child told him the candy was not just chocolate, “it was hope.”

After the airlift, Halvorsen received a permanent USAF commission and earned bachelor’s and master’s degrees from in aeronautical engineering from the University of Florida. He worked on cargo aircraft development at Wright-Patterson Air Force Base, Ohio, from 1952 to 1957 then joined the new Air Force Space Systems Division in California. There he worked on the Titan III launch vehicle and the X-20 Dyna-Soar reusable spacecraft programs, serving with Air Force Systems Command through 1962. Subsequent assignments took him back to Germany and technology offices at Headquarters, USAF. He developed plans for the Manned Orbiting Laboratory program, which would have put a small Air Force space station in orbit for reconnaissance purposes. He commanded the 6596th Instrumentation Squadron at Vandenberg Air Force Base, Calif., supporting space launch and satellite operations.

In 1970, Halvorsen was assigned as commander of USAF’s air base group at Tempelhof. His final USAF assignment, as a colonel, was as the inspector general for Ogden Materiel Center at Hill Air Force Base, Utah. He retired in 1974 with more than 8,000 hours of flying time.

During his time commanding operations at Tempelhof, Halvorsen earned a second master’s in guidance and counseling and in retirement served as assistant dean of student life at Brigham Young University. He and his wife Alta also served as Mormon missionaries in England and Russia in retirement.

Halvorsen organized or supported candy drops in other war zones during his career as well, in Japan, Albania, Guam, Bosnia-Herzegovina, and Iraq. He was also a continuous goodwill ambassador for the Air Force and the United States, making thousands of speeches and visits, especially to schools, to discuss Operation Little Vittles.

He wrote the books “The Berlin Candy Bomber” and “The Candy Bomber: Untold Stories from the Berlin Airlift’s Uncle Wiggly Wings.”

Among his many awards and honors, the Air Force presented Halvorsen with its Cheney Award for humanitarian service as well as the Legion of Merit. It also named an award for outstanding achievement in air transport for him. In addition, the service named a key piece of cargo handling equipment the Halvorsen Loader and named the C-17 Aircrew Training Center in Charleston, S.C., for him. In 1974, the West German government awarded Halvorsen its Order of Merit service cross. He was inducted into the Utah Aviation Hall of Fame in 2001 and received the Congressional Gold Medal in 2014. The Utah legislature recognized him with a resolution in 2017 praising him for “unselfish acts” that brought honor “to himself, his family, the United States Military, the citizens of … Utah, and the citizens of the United States.”

“During Berlin’s darkest hour, he was the light that shone through,” Chief Master Sergeant of the Air Force JoAnne S. Bass said of Halvorsen on Twitter.