Face of the Home Front Dies 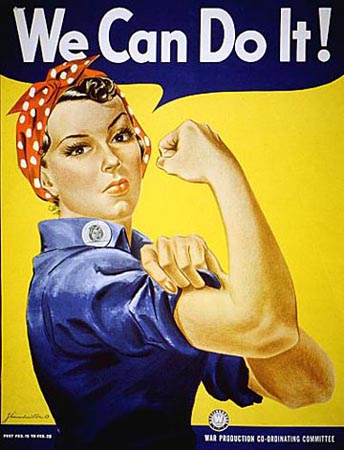 Geraldine Hoff Doyle, the iconic face of “Rosie the Riveter” depicted on the famous World War II “We Can Do It!” poster, has died in Lansing, Mich. She was 86. Her death on Dec. 26 was the result of complications associated with arthritis, reports the New York Times. In 1942, a United Press photographer aiding the war effort snapped a photo of Doyle, then 17 years old, at a metal-pressing plant near Ann Arbor, Mich. Unbeknownst to Doyle, Westinghouse War Production Committee-commissioned artist J. Howard Miller used Doyle’s face as inspiration for the now, classic poster, which ironically, she had never noticed until 1984. Unlike the poster’s muscular depiction of Doyle, she was actually glamorous and slender. In fact, Doyle, also a musician, quit the factory soon after the photo, fearing injury would preclude her from playing her cello, according to the newspaper.