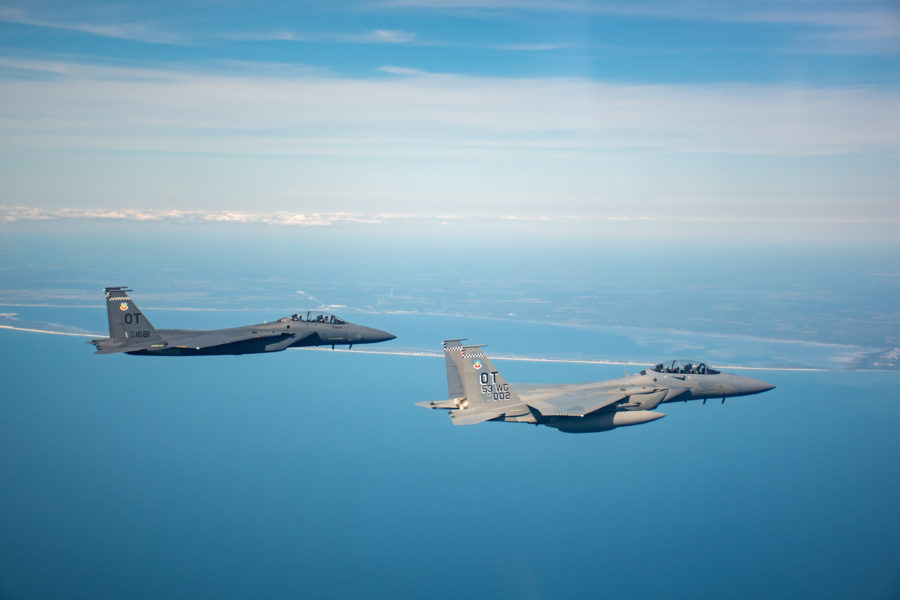 F-15EX Wins Some, Loses Some in Northern Edge

The F-15EX both shot down some adversaries and was shot down itself during the recent Northern Edge wargame in Alaska, and work is underway to analyze the results of its first appearance in the major force exercise, according to a test pilot who participated.

Statistics such as the mission capable rates of the aircraft have not yet been tabulated, but the jets flew a combined 33 sorties during the exercise from April 28-May 14.

The two first-of-their-kind F-15EXs—being used for concurrent operational and developmental test—played in Northern Edge only two weeks after they were delivered to the Air Force. The goal was to see if they could play the part now met in the Combat Air Forces by the F-15C plus add some capability to that mission, according to Lt. Col. John O’Rear of the 84th Test and Evaluation Squadron.

Among the test points were how the F-15EXs could integrate with F-15Cs as well as larger forces, including fifth-generation F-22s and F-35s, O’Rear said.

Though the F-15EXs “tallied some kills while they were up there,” O’Rear acknowledged there were also some losses.

“If you go into any large force exercise and you come back with everybody—with no blue losses—I would probably say that your threat is not as robust as it needs to be, in order to get the learning,” he said. Northern Edge was meant to be a multi-service exercise against a near-peer threat having some low-observable capabilities.

Although O’Rear couldn’t speak to the incidents where the F-15EXs were shot down, “in this kind of environment, most of your blue ‘deaths’ are probably going to be outside of visual range, just because of the threat we’re replicating,” he said. Visual range dogfights are “not something that happens a whole bunch.”

The jets also exercised the Eagle Passive Active Warning Survivability System, an electronic warfare suite meant to buy the jet more survivability against modern threats. It was the second wargame outing for the EPAWSS, after a Black Flag exercise In December 2020 at Nellis Air Force Base, Nevada.

“We’re still gathering data” on how the EPAWSS performed, but the initial, “anecdotal” results “look promising,” O’Rear said. “In general, it’s looking like it was on track for what we were expecting to see” at Northern Edge.

The exercises pitted about 50 Red team aircraft against a like number of Blue forces, he said. The EPAWSS “was able to integrate in a large force environment with multiple sources of … radio frequency being transmitted across the airspace … It was able to process that.”

In addition to the self-protection features of EPAWSS, a test point was to see if it could help stealthy F-22 and F-35s operating in proximity. The additional jamming “can help the F-35 get closer to the adversary,” O’Rear said. “The more clutter, the more electronic attack you have out there, the more difficult it is for enemy sensors to work through that.” The EPAWSS was able to integrate with “a coordinated electronic attack throughout the force package.”

The exercise also imposed severe jamming of communications and Global Positioning System data, compelling pilots to operate around those limitations and rely on “contracts” with other USAF aircraft, aircraft from other services, and ground fires to “be where they’re supposed to be” at the appointed time, O’Rear explained.

The F-15EX has “full air-to-ground capabilities,” but those were not exercised in the wargame, he said. “The EX’s primary goal was to go up there and execute the current C-model mission.” It performed air dominance as well as homeland defense missions, he said.

The threat was meant to be one ”where we don’t have the ability to go out … and take zero losses,” he said.

The point “is not winning every match. It’s to learn where our weaknesses are and how we mitigate those capability gaps,” added O’Rear.

In connecting with other-service assets in a “degraded ops environment,” he said, “we saw a lot of places where we’re doing really well, and places where we need some work.” Alternative communication methods included Link 16 and “gateway options” in which an interpreter aircraft translates the special waveforms of stealth aircraft to each other and fourth-gen aircraft. There was “redundancy and effectiveness across the entire force package,” he said.

Capabilities that the F-15EX adds to the F-15C are its fly-by-wire system; two extra weapon stations—which O’Rear said was “pretty impressive” in the overall mix—an updated cockpit with touch-screen color displays; EPAWSS and advanced radar capabilities.

Planning for the F-15EX’s participation in Northern Edge started more than a year ahead of time, he said—long before the aircraft were delivered, or even built.

“We set the milestones” for the EX test program “over a year ago,” he said. The test team looked at whether they thought they could be ready in time, but inserting the EX into a large-force exercise—the next one won’t happen for two years—was an opportunity too valuable to pass up, he said. The EXs were used to evaluate new tactics and techniques as well as being put through their paces.

Northern Edge is different from a Red Flag, O’Rear explained.

“You have the option to use baseline tactics, but the emphasis is not just getting upgrades for [Combat Air Forces] wingmen and flight leads. It’s to go out there and do high-end tests in a high-end, highly-contested, and degraded environment, and to see if the new tactics we’re developing are helpful or a hindrance.”

The F-15EX has been touted as being capable of carrying and launching “outsize” air-to-air and air-to-ground munitions, but none of these was exercised, even in simulated form, during the event. However, a B-52 involved in the wargame launched a simulated AGM-183 Air-launched Rapid Response hypersonic missile during the exercise.

Another lesson re-learned, O’Rear said, is that the various services have a different language that must be learned to properly coordinate. “Everybody has their own doctrinal language,” he said.