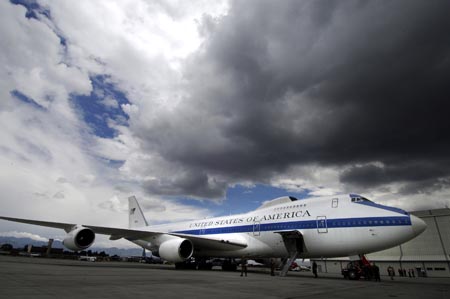 The Air Force is celebrating this month the 35th anniversary of the first E-4 National Airborne Operations Center aircraft going on alert. Today the Air Force operates four E-4Bs that are assigned to the 55th Wing at Offutt AFB, Neb. These aircraft, a militarized version of the Boeing 747-200, support the President, Defense Secretary, and Chairman of the Joint Chiefs of Staff. When first fielded, the A model E-4 was known as the National Emergency Airborne Command platform and its purpose was to provide the President with a safe location to conduct wartime operations in the event of a nuclear attack. Since the end of the Cold War, the E-4 has remained on alert status, but its mission has expanded to support the national leadership’s command, control and communications requirements in any type of threat scenario and non-war crises like natural disasters. (Offutt report by Ryan Hansen)