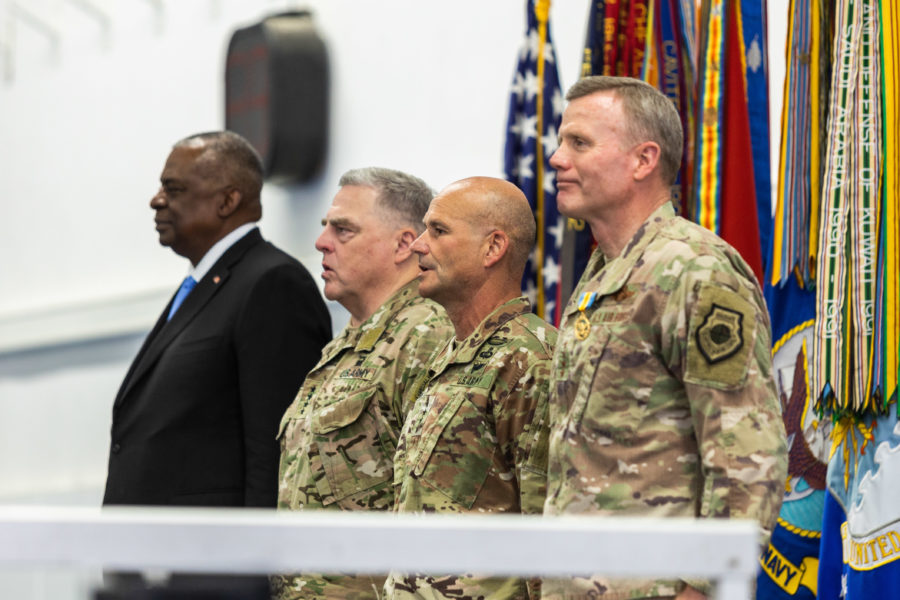 EUCOM Command Changes Hands at a ‘Hinge in History’

The change of command ceremony at Patch Barracks, Germany, was marked by both celebrations and praise for Wolters and Cavoli and references to the historic situation still unfolding.

Troops are “standing watch right now during one of the most pivotal and dangerous times in our lifetime,” added Chairman of the Joint Chiefs of Staff Gen. Mark A. Milley.

Cavoli, for his part, also briefly acknowledged the challenging circumstances in which he is taking the job, thanking Austin, Milley, and President Joe Biden for their trust in him.

“​​I understand just how heavy the responsibilities are at this time in Europe,” Cavoli said. “I will not let you down.”

Wolters praised Cavoli as the perfect person to serve as commander of EUCOM and NATO’s Supreme Allied Commander Europe in this moment.

“When you talk about quicker, smarter, faster, and more capable in the next generation of commander, that is exactly what USEUCOM is getting with Chris,” Wolters said.

He’ll face a dynamic, tense environment from Day 1. The U.S. has upped its presence in Europe to 100,000 troops in recent months, and Biden highlighted a series of force posture movements in a June 29 press conference at the NATO summit in Madrid, Spain. At the same time, NATO has announced plans to expand its Response Force dramatically, from 40,000 to 300,000.

Meanwhile, Russia’s invasion has dragged on, leaving tens of thousands dead and millions as refugees. The U.S. has continued to send billions of dollars worth of military and humanitarian aid to Ukraine, as have dozens of other countries. U.S. European Command’s EUCOM Control Center Ukraine helps to coordinate the logistics of delivering all that aid to the front line inside Ukraine.

All of this comes less than a year after EUCOM shifted rapidly to help with the influx of refugees from Afghanistan in the wake of the U.S. withdrawal from that country. U.S. bases in Europe erected entire “cities” to house the refugees.

Given all those challenges, Milley credited Wolters for “masterfully” leading EUCOM.

“It’s not an exaggeration that Tod Wolters, as the EUCOM commander and as the Supreme Allied Commander Europe, has faced more challenges than any SACEUR since Eisenhower,” Milley added. Later in the ceremony, Milley pinned the Defense Distinguished Service Medal on Wolters.

But while Russian aggression remains the most pressing concern for NATO and Europe, Austin said Cavoli, the former head of U.S. Army Europe and Africa, will also need to consider other challenges.

“Gen. Cavoli is exceptionally well prepared to further strengthen NATO’s posture on the Eastern Flank—and to help forge a truly 21st-century security architecture for Europe. Because NATO, Chris, as you’ve said, ‘cannot be a one-problem alliance,’” Austin said. “And as you’ve also noted, NATO must stay vigilant across 360 degrees—from aggressive behavior from [China] to terrorism to climate change.”

Cavoli’s move to the head of EUCOM is just one of several changes to the top Pentagon leadership positions in Europe in the past few days. Cavoli formally handed over the command of U.S. Army Europe and Africa on June 28 to Gen. Darryl A. Williams, and Gen. James B. Hecker succeeded Gen. Jeffrey L. Harrigian as head of U.S. Air Forces in Europe-Air Forces Africa on June 27.