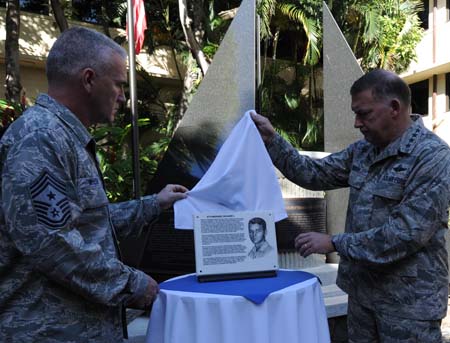 gathered last week at Pacific Air Forces’ Courtyard of Heroes at JB Pearl Harbor-Hickam, Hawaii, to honor the late CMSgt. Richard L. Etchberger, the Air Force’s most recent Medal of Honor recipient, and induct him into PACAF’s Wall of Valor. “[W]e are extremely happy that our nation . . . has given Chief Etchberger the recognition he deserved, and that today he can take his rightful place among Pacific Air Forces’ greatest heroes,” said Gen. Gary North, PACAF commander, during the ceremony. “[H]e served his country, his fellow man, and he made the ultimate sacrifice for which we honor him today,” said CMSgt. Brooke McLean, PACAF’s command chief. The April 29 ceremony concluded with North and McLean laying a wreath at the base of the courtyard’s eternal flame monument in Etchberger’s memory. Etchberger joined PACAF’s 29 other MOH recipients. (Pearl Harbor-Hickam report by Capt. Alysia Harvey) (For the story of Etchberger’s gallantry, read Etchberger, Medal of Honor)