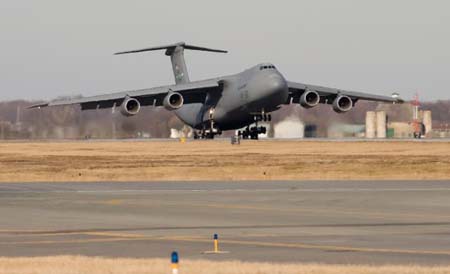 That’s the opinion of Rep. Mike Castle (R-Del.), who like fellow lawmaker Sen. Tom Carper (D-Del.), believes that the future of Dover Air Force Base rests on USAF continuing to modernize the behemoth airlifter to the C-5M configuration with new engines and avionics. They are not happy, according to a report by the News Journal, that some lawmakers want the Administration to continue C-17 production, which could come at the expense of the Super Galaxy upgrade program. Dover flies the C-17 as well as the C-5, but it got its full complement of the new airlifter last fall, so the two Delaware lawmakers are pushing to get all Dover C-5s upgraded, for as Castle told the News Journal, “means Dover Air Force Base remains that much more viable.” Carper complained that lawmakers supporting continued C-17 production see it “as a jobs program.” Hmmm.