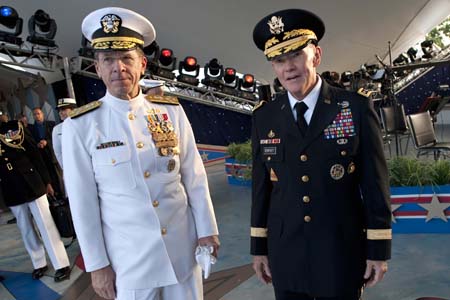 Obama on Monday introduced the last pieces of his new national security leadership team by announcing his choice of newly minted Army Chief of Staff Gen. Martin Dempsey to be the next Chairman of the Joint Chiefs of Staff and Adm. James Winnefeld as the next vice chairman. Winnefeld currently heads US Northern Command. Obama also selected Gen. Ray Odierno, US Joint Forces Command boss, to succeed Dempsey as Army Chief. Dempsey and Winnefeld “will make an extraordinary team,” said Obama during remarks in the White House Rose Garden. “Between them, they bring deep experience in virtually every domain—land, air, space, sea, cyber.” If the Senate gives the nod, Dempsey would replace Adm. Mike Mullen, Chairman since October 2007, who’s stepping down this fall. Winnefeld would succeed Marine Corps Gen. James Cartwright, vice chairman since August 2007, whose term ends this summer. (See also Gates statement and Mullen statement.)