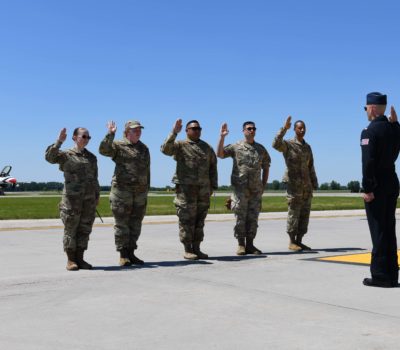 By Greg Hadley
In 2020, Air Force retention spiked to a 20-year high, driven largely by enlisted Airmen deciding to stay in the service amid the uncertainties of the COVID-19 pandemic. Two years later, as the effects of the pandemic recede, there has been a slight decline among both officers and enlisted back to pre-COVID levels, according to data provided by the Air Force. 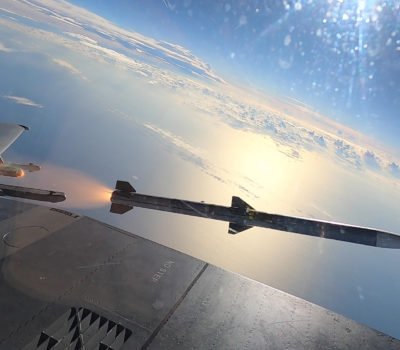 By John A. Tirpak
The F-15EX has demonstrated it can fire AIM-120 radar and AIM-9X heat-seeking missiles from new underwing stations, showing the new fighter's ability to carry and fire more missiles than its predecessor, the F-15C, the Air Force reported. 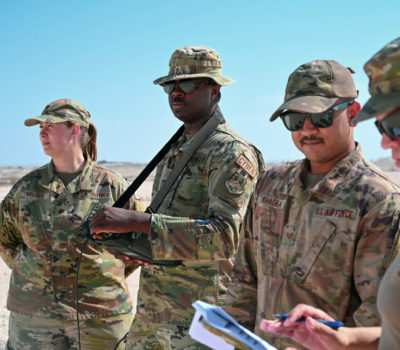 By Chris Gordon
A small Air Force team at Al Udeid Air Base in Qatar is working on solutions to mitigate one of U.S. Central Command’s primary issues: doing more with less. As part of a broader push in CENTCOM towards what leaders call “a culture of innovation,” Task Force 99 at Air Forces Central is working to help alleviate some of the pressure on the current force, as the U.S. military’s resources shift from the region but American forces continue to battle the remnants of ISIS and confront Iranian-backed attacks. 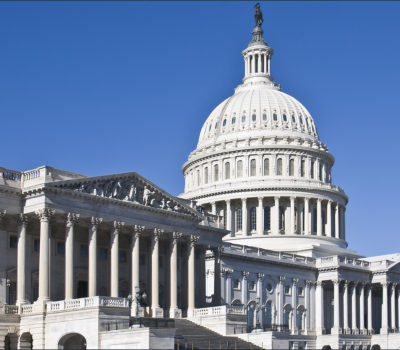 By Greg Hadley
As the House of Representatives struggles to elect a Speaker and begin the work of a new session, a bipartisan group of lawmakers began warning that the House can't perform its oversight duties. The House has been locked in a holding pattern since Jan. 3, with ten ballots coming and going and no candidate receiving the needed 218 votes to take the Speaker’s gavel.

Russian President Vladimir Putin on Jan. 5 ordered his armed forces to observe a unilateral 36-hour cease-fire in Ukraine this weekend for the Orthodox Christmas holiday, the first such sweeping truce move in the nearly 11-month-old war. Kyiv indicated it wouldn’t follow suit. Putin did not appear to condition his cease-fire order on Ukraine’s acceptance, and it wasn’t clear whether hostilities would actually pause on the 1,100-kilometer (684-mile) front line or elsewhere. Ukrainian President Volodymyr Zelenskyy dismissed the Russian move as playing for time to regroup its invasion forces and prepare additional attacks.

Lawmakers who oversee the defense budget are demanding answers from the Air Force about proposals to stop building virtually brand-new aircraft and other systems that the service’s leaders previously touted as vital. “While trade-offs occur to support force readiness and modernization, truncating programs that only recently transitioned into production and were hailed as supporting critical Air Force missions, such as personnel recovery and future tactical air, calls into question the strategic underpinning of these and other acquisition decisions,” appropriators noted in the report accompanying the latest federal spending law, which was enacted a week ago.

US and Germany Pledge Infantry Fighting Vehicles for Ukraine

The Biden administration on Jan. 5 announced plans to equip Ukraine with Bradley infantry fighting vehicles, while German officials said they would send Marders, decades-old weapons of a comparable class, as well as Patriot air defenses. The joint announcement by Berlin and Washington follows a similar move by France earlier this week. Paris pledged to send an unspecified number of AMX-10 RC vehicles, billed as light tanks on wheels boasting armor-breaking 105 mm guns.

Efforts by Russia, Iran, and other countries to interfere with U.S. elections can affect how citizens from allied countries perceive their partnership with the United States, according to a recent study by researchers in Australia. The researchers asked more than 2,000 Japanese respondents how confident they were that the United States would come to Japan’s aid in a conflict, and how confident that the U.S. would be able to do so.

The Space Force has approved both competitors—Raytheon Intelligence & Space (RI&S) and Boeing’s Millennium Space Systems—to move forward with building flight test prototypes to detect and track missiles in medium Earth orbit, according to officials from both companies. The two companies developed their payload designs under the Missile Track Custody Demonstration (TCD) effort, which is managed by Space Systems Command (SSC) and was a precursor to the Space Force’s new “Resilient Missile Warning Missile Tracking – Medium Earth Orbit (MEO)” program.

The U.S. Air Force's newest HH-60W Jolly Green II combat search-and-rescue (CSAR) helicopters have been operating in east Africa on their first deployment. While specific locations haven't been disclosed, recently released Defense Department photos nonetheless show the aircraft conducting exercises in the region. The development comes after the Air Force declared initial operational capability, or IOC, for the helicopters on Sept. 9 of last year, though the milestone wasn’t publicly announced until October along with when the service first disclosed the type's inaugural deployment.

After years of scandals and calls for oversight, Congress is taking a few more steps to improve military housing. The 2023 version of the National Defense Authorization Act calls on the Defense Department to report more details to Congress on its housing privatization projects, including changes to contracts involving loans or ground leases. Reporting by government watchdogs and media outlets over the last several years revealed widespread deficiencies in military housing, including mold, rodents and communication deficiencies between tenants and housing management.

General Atomics Electromagnetic Systems won a contract from Advanced Space to build a satellite that the Air Force Research Laboratory plans to launch to deep space in 2025. General Atomics, based in San Diego, Calif., announced Jan. 5 it will produce an ESPA-class satellite bus, integrate, and test payloads for Advanced Space, the prime contractor for AFRL’s Oracle experiment.

From engines cheap enough to be considered “expendable” on munitions, to rockets that can carry payloads to the Moon, the Air Force is constantly looking to improve its means of propulsion. “Propulsion is a critical component of our quest to attain faster speeds, greater range, higher altitudes and improved power and thermal management capabilities,” Maj. Gen. Heather Pringle, commander of the Air Force Research Laboratory, said recently.

‘Devotion’ was one of the finest movies of 2022, but it didn't find the traction it deserved when it was released in theaters this past Thanksgiving. It's the first major studio release to tell a Korean War story since Gregory Peck starred in ‘Pork Chop Hill’ in 1959. The movie tells the story of the friendship between Jesse Brown, the first Black Navy aviator, and Thomas Hudner, who was awarded the Medal of Honor for his heroism during the Korean War. Director JD Dillard is the son of Bruce Dillard, the second Black aviator to fly with the Blue Angels, and he brought a lot of passion to the movie.