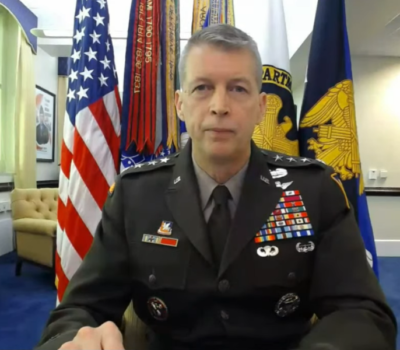 By Brian W. Everstine
Senior Department of the Air Force and National Guard officials are preparing to brief Defense Secretary Lloyd J. Austin III on plans for a combined Space Force Active and Reserve component and separate Space National Guard in the coming days. National Guard Bureau chief Army Gen. Daniel R. Hokanson told the House Appropriations defense subcommittee that the creation of a Space National Guard is among his most “pressing concerns” and said he believes there is consensus among top leaders on the planned construct. The proposed model will be a “two-component construct” with an Active/Reserve “combined component, then a Space National Guard,” Hokanson said. 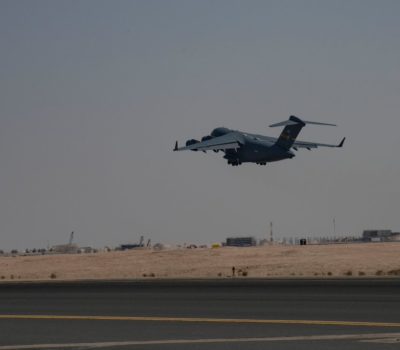 C-17s Fly Equipment Out of Afghanistan as Withdrawal Continues

By Brian W. Everstine
The retrograde from Afghanistan is underway, with U.S. Air Force C-17s carrying equipment and other materiel out of the country. U.S. Central Command in a May 4 statement said about 60 C-17 loads have moved out of the country since President Joe Biden on April 14 announced the end of the war in Afghanistan. Additionally, more than 1,300 pieces of equipment have been turned over to the Defense Logistics Agency to be destroyed. So far, CENTCOM estimates it has completed between 2 and 6 percent of the entire retrograde process, with updates expected weekly. 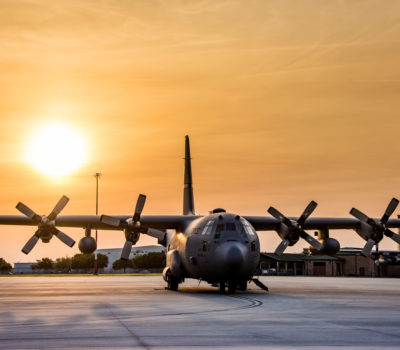 Guard Chief Pushes Back on Proposed Cut to C-130 Fleet

By Brian W. Everstine
Defense Department planners need to better understand how C-130s are used in domestic operations, the Chief of the National Guard Bureau said. Gen. Daniel R. Hokanson told members of the House Appropriations defense subcommittee May 4 that he needs to “retain every single one of those flying squadrons because of what they bring for our nation.” C-130s are used for airlift support, Antarctic resupply, aeromedical missions, weather reconnaissance, aerial spray missions, firefighting duties, and natural disaster relief missions. Those domestic missions, however, are not typically at the forefront of decision making, he added. 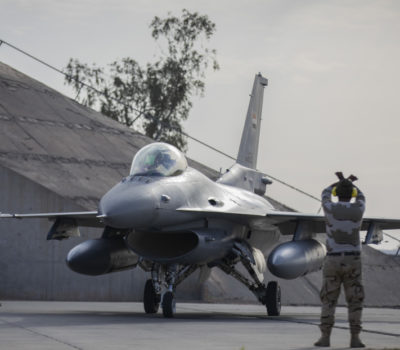 By Brian W. Everstine
Iranian-backed militias have focused attacks on key bases in Iraq, prompting U.S. contractors to leave the Iraqi Air Force’s major F-16 base as the country’s Fighting Falcons are working to increase their capacity to train and conduct airstrikes, according to a new report. The militias continued to conduct harassment-style attacks on the U.S. Embassy, diplomatic facilities, and installations such as Balad Air Base, according to the Defense Department’s Lead Inspector General for Operation Resolute Support in a quarterly report released May 4. Balad does not host U.S. service members, but it does host contractors from Lockheed Martin who are critical to supporting Iraqi F-16 operations.

The U.S. Air Force’s F-35 and F-22 stealth fighters passed data to one another using a communications gateway aboard a Lockheed Martin U-2 spyplane. The F-35’s Multifunction Advanced Data Link and the F-22’s Intra-Flight Data Link are incompatible, so the two aircraft types cannot transmit data to each other. To get around that problem, the USAF, Missile Defense Agency, and Lockheed Martin used an “Open Systems Gateway” communications payload aboard a U-2 to pass data between one F-22 and five F-35s.

About two dozen family members combed Surfside Beach, Texas, on May 3, joining the U.S. Coast Guard in the search for missing U.S. Airman Elijah Posana. The 22-year-old disappeared just before noon on May 2.

OPINION: Get Real: The F-35 is the Combat Power America Needs

“Never in the history of air combat has a pilot landed back at base, after putting their life on the line flying a grueling combat mission and remarked, “Thank goodness my jet met its life cycle sustainment cost estimates.” While this may sound absurd, it reflects the line of inquiry pursued during a recent House Armed Services Committee (HASC) hearing in which the F-35 was excoriated. Like most defense acquisition programs, aspects of the F-35 program need to improve, but the hearing manufactured a distortion of context by omitting details about the growing threat, the geriatric Air Force, or even a discussion of how Congress can chart improvement paths,” writes retired Maj. Gen. Larry Stutzriem, who holds the General T. Michael Moseley Chair at the Mitchell Institute for Aerospace Studies.

The Defense Department inspector general announced [May 4] a plan to begin evaluating DOD's actions on "unidentified aerial phenomena." The evaluation will begin this month, according to the announcement. The project will "determine the extent to which the DOD has taken actions regarding Unidentified Aerial Phenomena (UAP)." In April, the DOD confirmed the authenticity of leaked videos taken by Navy pilots showing unidentified flying objects.

‘Have Bombs, Will Travel’: How Agile Deployments are Reshaping Combat in the Middle East

The Air Force’s latest push for a more flexible force—known as agile combat employment—could help the service keep Airmen at home longer and its aircraft readiness up, the leader of a key expeditionary wing in the Middle East told Air Force Times on April 30. But deployments could become more intense for Airmen when they do go abroad. Adopting ACE into regular operations across the force would likely increase the pace and frequency of missions, said Brig. Gen. Larry Broadwell, commander of the 380th Air Expeditionary Wing at Al Dhafra Air Base in the United Arab Emirates. But that’s not the only measure of military prowess—it’s also about efficiency.

Dozens of special warfare Airmen weathered heavy wind and rain for their 10th annual 24-hour Challenge Run last week at the largest U.S. military base on the Korean Peninsula. The event, hosted by the 604th Air Support Operations Squadron out of Camp Humphreys, South Korea, honored the 12 members of the Air Force’s Tactical Air Control Party who have died in combat or during training since 1989.

Pentagon financial leaders said they’re making meaningful progress toward finally earning a clean audit opinion. So much so, in fact, that they’re now willing to project a tentative timeframe for when it’ll happen: 2028. Testifying before the House Armed Services Committee last week, defense officials emphasized that the 2028 date is by no means a sure thing, but it’s not chosen out of thin air, either.

The Space Force is in talks with U.S. Cyber Command and the Air Force to bring more specialized cyber personnel into the fold, said the deputy commander of Space Operations Command on May 3. Maj. Gen. DeAnna M. Burt, who is also commander of Combined Force Space Component Command, said she expects cyber protection teams unique to the Space Force to be in place in three to five years.

OPINION: We Don’t Have Enough Information to Evaluate Arguments for a New ICBM

“As defense budgets come under increased scrutiny, lawmakers are taking a close look at the future of the ground-based leg of America’s nuclear triad. On the current course, the country’s 400 single-warhead, silo-based LGM-30G Minuteman III intercontinental ballistic missiles are slated for modernization and replacement with a new nuclear missile known as the Ground-based Strategic Deterrent. GBSD’s strategic value-add over Minuteman III is nil to negligible. … As long as 400 American ICBMs remain ready to launch in their silos, Russian planners must assign their own warheads to these targets. Ankit Panda, Stanton senior fellow at the Carnegie Endowment for International Peace.

Turkey’s air force is becoming obsolete, according to a new Turkish study. “Turkey and the Turkish Air Force's air warfare capabilities face a serious test over the next 10 to 20 years,” writes Can Kasapoglu, director of the security and defense program at Turkish think tank EDAM, who authored the report.

The Air Force offered its first glimpse of a new virtual operations prototype during a live equipment demonstration at Tyndall Air Force Base, Florida, on April 28. The demonstration display, dubbed the Technology Lab, offered media a peek into the future of one of the innovative technologies that will make Tyndall AFB the Installation of the Future. The Installation Resilience Operations Center, or IROC, prototype is a game-changing solution for enhancing base security, emergency response, and facility operations.

Laugh, and Maybe Cry, with These Searing Parody Videos about Air Force Life

Any Air Force recruiter’s office is filled with images of fast jets, tacticool dudes with guns, and cyber blinky-lights that make the branch look like the headquarters of Marvel’s S.H.I.EL.D. But then you get to the other side of the curtain, where you’re stuck buying biscuits from Red Lobster because you made the mistake of asking the security forces Airmen guarding the gates of the Air Force base if they needed anything. That’s the side of the service that Senior Airman Chambers and Senior Airman Wooh Man, who went by their social media handles for this article, make skits about in a long-running series of comedy sketches they started last fall when they were stationed together in Guam.