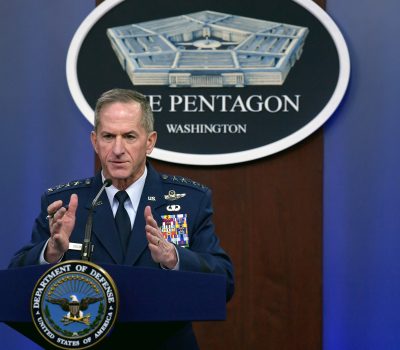 USAF Looking to Pare Down Non-Mission Essential Tasks During Pandemic

By Brian W. Everstine
The Air Force and its major commands are “resetting”—deciding the mission-essential tasks it must accomplish, while finding way to pare down or completely stop other tasks as the coronavirus outbreak and its corresponding impact spreads. Air Force Chief of Staff Gen. David Goldfein ordered all major command bosses to report back to him by April 1 on what they deem to be mission essential, with the goal to determine the best way to accomplish those missions while keeping the service safe, he said. Those reports are the beginning of a discussion and planning that will play out in the near future. 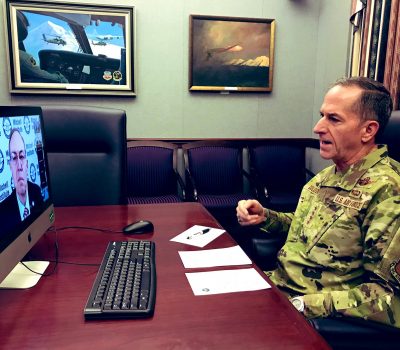 By John A. Tirpak
One upside of the COVID-19 pandemic is that Air Force retention, particularly of pilots and maintainers, will likely improve as the global downturn in the airline business reduces the commercial appetite for people in those specialties, Air Force Chief of Staff Gen. David Goldfein said April 1. The Air National Guard seems to have everything it needs for its civilian disaster response mission, he said, and the focus now is to make sure those who get called up get full access to health and family support benefits. 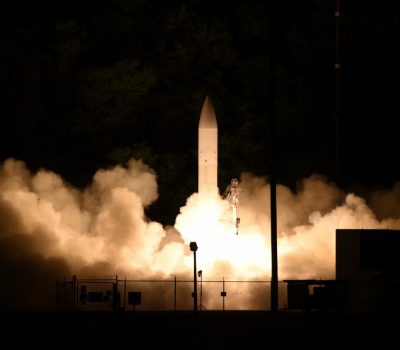 By John A. Tirpak
As the defense budget flattens, the other services may have to rethink their pursuit of long-range fires, purely because duplication is only a good thing when it's affordable, Air Force Chief of Staff Gen. David Goldfein said during an online Mitchell Institute event April 1. He also noted that exhaustive wargaming has shown that future wars will only be won with a "hybrid" approach of stand-off and stand-in weapons, and can't be won staying "outside" enemy defensive zones. 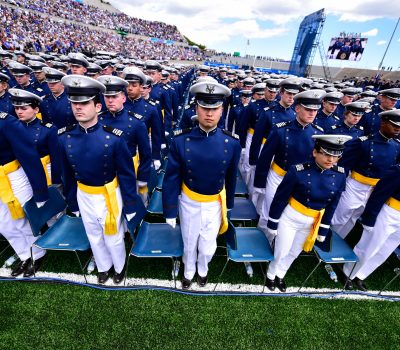 USAFA Class of ’20 to Graduate Early

By Tobias Naegele
The Air Force will graduate the U.S. Air Force Academy class of 2020 on April 18, more than a month ahead of schedule, and loosen restrictions on the senior class, which has been on virtual lockdown because of the Covid-19 pandemic. “When the class of 2020 entered USAFA we were a nation at war,” Academy Superintendent Lt. Gen. Jay Silveria said. “You have all signed up to serve in a time of war—to make a difference. We still battle terrorism and extremism around the world, but today we are at war with another enemy, a global pandemic, and that fight is unconventional. … We must make unconventional decisions and take what some would consider extreme measures. We must make bold choices, and we will.” 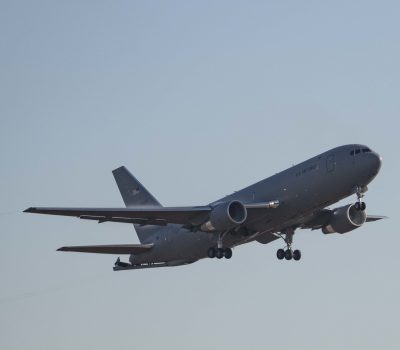 By Brian W. Everstine
The newest Category One deficiency on the KC-46 is the type of flaw that can be expected when a new aircraft is evaluated, and is not expected to impact the timeline, Air Force Chief of Staff Gen. David Goldfein said. The service announced this week that fuel leaks between the primary and secondary fuel protection barriers within the aircraft. The problem was first discovered in July 2019, but was recently upgraded to the most serious classification, meaning it could impact flight safety. Goldfein said April 1 that he is not “hearing anything right now that indicates to me that it will cause a delay,” though it is still early, because engineers are working on the issue. 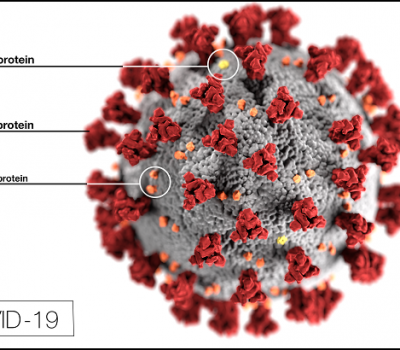 By Rachel S. Cohen
The Air Force wants to hear from small businesses with big ideas to combat the spread of the new coronavirus. AFVentures, a new group started to improve outreach to small companies that do not traditionally work with the Pentagon, published a solicitation March 30 that focuses on six areas related to the ongoing pandemic: decision support, personnel needs, readiness, logistics, medical needs, and other ideas that do not fall under those topics. The work is intended to help the Air Force accomplish its various missions, but could be applicable to others in the military and in broader society. Proposals are due April 30. USAF will take about a month to choose the winners. 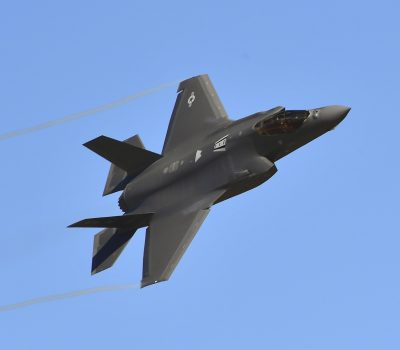 By Amy Hudson
Lockheed Martin was awarded a $4.7 billion contract modification for 78 F-35 combat aircraft, including 48 F-35As for the U.S. Air Force, 14 F-35Bs for the Marine Corps, and 16 F-35Cs for the U.S. Navy and “associated red gear,” according to a March 31 contract announcement. The company also was awarded a $202.8 million cost-plus incentive fee contract to “develop, sustain, and produce software builds as well as carryout developmental flight tests in support of the Joint Strike Fighter aircraft,” according to the contract announcement. 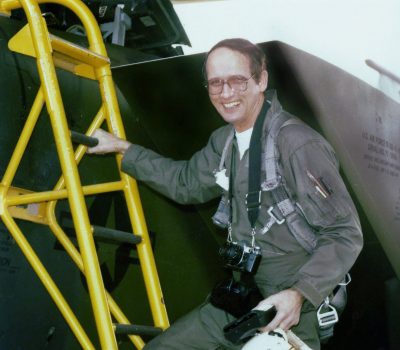 By John A. Tirpak
F. Clifton Berry Jr., former editor-in-chief of Air Force Magazine, as well as several other prominent defense journals, died March 13 at the age of 88. Berry, who received a bronze star for actions under fire in Vietnam, wrote or co-authored 11 books about U.S. military or aviation history and edited 14 more.

China has concealed the extent of the coronavirus outbreak in its country, under-reporting both total cases and deaths it’s suffered from the disease, the U.S. intelligence community concluded in a classified report to the White House, according to three U.S. officials.

Some of the sailors from the USS Theodore Roosevelt will be quarantined in hotel rooms in Guam as the number of coronavirus cases aboard the aircraft carrier approaches 100, a deteriorating situation that led the ship's commanding officer to issue a stark warning to top Navy leadership about the need to get sailors off the ship.

The Defense Department has temporarily suspended the deployment of its new commercial electronic health records system. According to an official from the Defense Healthcare Management System, the decision will allow military health care providers to better focus on the COVID-19 outbreak.

Several Ohio lawmakers, led by Republican Rep. Mike Turner, have sent a letter to the Defense Department requesting better COVID-19 guidance be provided to the defense industrial base, especially those working at the Air Force Research Laboratory at Wright-Patterson Air Force Base, Ohio. The lawmakers say they have been contacted by 13 small businesses in Ohio that have research and development contracts with AFRL.

If Space Startups Fail, the Pentagon’s Going to Need Some New Plans

Literally and figuratively, there’s no area of military activity that’s further away from the coronavirus than U.S. military assets in space. But the economic effects of the counter-virus lockdown are causing potentially fatal problems for some young space companies and that could threaten the Defense Department’s plans.

Attorneys behind a lawsuit which could open up an extra year of GI Bill education benefits to hundreds of thousands of veterans this week asked an appeals court to fast-track their case because of the potential windfall it could bring to families facing financial problems related to the coronavirus outbreak.

Despite not being able to hear from many residents who wanted to speak, the Madison City Council on April 1 took a clear stand against placing F-35 jets at Madison’s Truax Field.

A Congressionally mandated panel of technology experts has issued its first set of recommendations for the government, including doubling the amount of money spent on artificial intelligence outside the Defense Department and elevating a key Pentagon office to report directly to the Defense Secretary.

The amount of funding for defense research awarded through other transaction authorities have increased nearly tenfold in five years, according to a new analysis seen exclusively by Defense News. The report, by data and analytics firm Govini, shows the use of OTAs and small business innovation research contracts has expanded to the point that, in 2019, the two methods accounted for $9.6 billion, or 10 percent of the Defense Department’s research, development, test, and evaluation spending.

Coronavirus May Have Caused the Earth to Stop Vibrating So Much

Coronavirus may have inadvertently caused Earth to vibrate less, with lockdown measures leading to a huge drop in the use of industrial machinery and transportation around the world. Seismologists have said that since measures to curb the spread of the virus were put in place, there has been a noticeable drop in the planet's "seismic noise." This is the persistent vibration of the ground as a result of a multitude of factors, including human activity.