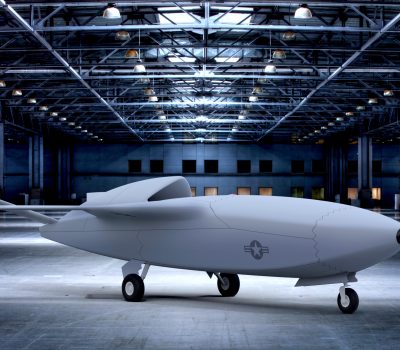 By Amy Hudson
The Department of the Air Force has submitted a $4.2 billion unfunded priorities list to Congress for fiscal 2021, which includes roughly $3.2 billion for the U.S. Air Force and $1 billion for the fledgling U.S. Space Force. The USAF request, which is significantly more than the additional $2.8 billion requested in fiscal 2020, asks for an additional $1.3 billion for 12 more F-35 Joint Strike Fighters and long-lead support items, as well as for money for advanced technologies, weapons, and future ranges. The Space Force’s first unfunded priorities list covers new technologies, warfighter development, asset protection, and fielding additional systems. 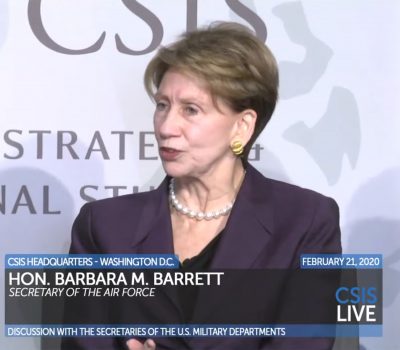 By Rachel S. Cohen
Heading into budget negotiation season, the three civilian heads of the armed forces outlined their looming struggles with Capitol Hill at a Feb. 21 Center for Strategic and International Studies panel. Air Force Secretary Barbara Barrett said it’s harder to convince lawmakers of the merits of investing in space assets and digital networks because their benefits are more abstract than a fighter jet or a tanker: “There aren’t tires to kick." Acting Navy Secretary Thomas Modly added it’s presumptuous to think the Pentagon might get a higher topline in fiscal 2022 and beyond. 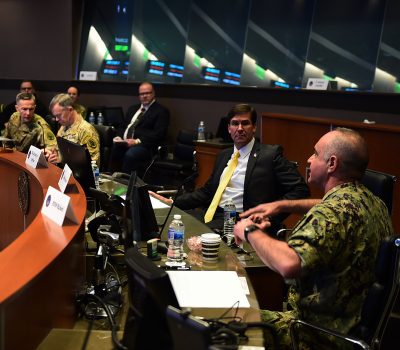 By Rachel S. Cohen
U.S. Strategic Command simulated the possibility of nuclear conflict in Europe for Defense Secretary Mark Esper during a visit this week to Offutt Air Force Base, Neb. The exercise is part of the Pentagon’s routine slate of wargames and other events that it uses to consider its steps if nuclear war erupts, and comes as the U.S. is pursuing so-called “tactical” nuclear weapons to counter similar assets in Russia’s stockpile. The exercise featured a pretend Defense Secretary and a President facing a situation where Russia dropped a low-yield nuclear weapon on “a site on NATO territory” in wartime, a senior defense official told reporters Feb. 21. The United States hit back in a “limited response” using another nuclear weapon. 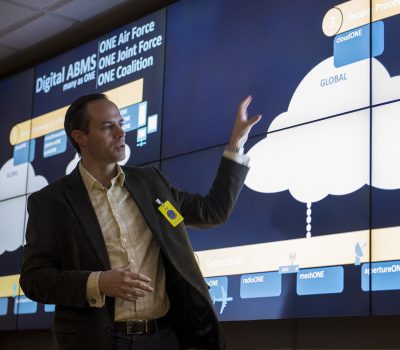 Roper Aims for 50 Percent Failure in Next ABMS Experiment

By John A. Tirpak
The next Airborne Battle Management System experiment, to take place April 8, will be "massive" and include space superiority activities and the shoot-down of both an unmanned aircraft and a cruise missile, Air Force acquisition chief Will Roper told reporters February 21. He also discussed how the Air Force will go about choosing contractors to build the ultimate system on a program that must be developed altogether differently than any previous project.

U.S. Space Command could spend another 10 months in limbo after President Donald Trump spurned a full-press lobbying effort from Colorado to keep the command, which is temporarily located at Peterson Air Force Base, and steered clear of a commitment.

OPINION: Who Should Join the U.S. Space Force?

“Determining the best way to transfer personnel into the Space Force is not an easy task,” writes Army Maj. Gen. Ryan Stephenson, a space operations officer assigned to the Office of the Assistant Secretary of the Air Force for Space Acquisition and Integration. “DOD will have to balance its drive to change the culture of our current space operators and streamline space activities, with the potential impacts to other military branches that depend on space technology to fight and win.

A temporary truce between the United States and the Taliban took effect Feb. 21, setting the stage for the two sides to sign a peace deal Feb. 29 aimed at ending 18 years of war in Afghanistan and bringing U.S. troops home.

OPINION: ‘What We, the Taliban, Want’

“Everyone is tired of war,” writes Sirajuddin Haqqani, deputy leader of the Taliban. “I am convinced that the killing and the maiming must stop.”

Turkey has asked the U.S. to deploy two Patriot missile-defense batteries on its southern border to free it to punish any future attacks by Russian-backed Syrian troops, according to a senior Turkish official in Ankara.

The L3Harris-built Navigation Technology Satellite-3 (NTS-3) platform is on track for a critical design review by the Air Force Research Laboratory, after the GPS satellite testbed cleared a preliminary design review by Air Force officials in February. "It is basically the forerunner for the next-generation of capability in GPS satellites," said Bill Gattle, president of space systems at L3Harris' space and airborne systems division.

Defiant, Raider, and SARA Fly Together in First Public Demo

Three of Lockheed Martin’s Sikorsky’s experimental helicopters flew together for the first time in a public demonstration Feb. 20 at the company’s flight test facility. The Sikorsky-Boeing SB-1 Defiant coaxial demonstrator made its public flight debut reaching a cruise speed of 140 knots and demonstrating low-speed agility at lower acoustic levels compared to a conventional helicopter.

An all African-American KC-135 crew from Fairchild Air Force Base undertook a mission to refuel F-16 Fighting Falcons from the 187th Fighter Wing, a historic Red Tail Squadron, at Maxwell Air Force Base, Ala., Feb. 18, in honor of Black History Month. The flight represented black military heritage and provided tribute to the WWII Tuskegee Airmen, who played a significant wartime role and paved the way for minority representation in today’s Air Force.