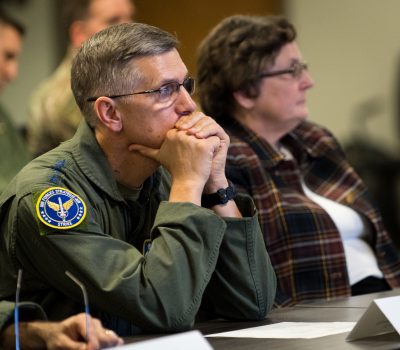 By Rachel S. Cohen
Air Force Global Strike Command’s second decade in business will be a busy one. Created in 2009 as Strategic Air Command’s post-Cold War replacement, Global Strike oversees the bulk of the Pentagon’s nuclear weapons and provides bomber aircraft for combat operations and deterrence flights around the world. More than 70 years since a nuclear weapon was last used, and three decades after the Cold War ended, Global Strike is making changes to take on a new era of deterrence—one that spans not just nuclear assets but faster weapons and growing space, cyber, and electromagnetic spectrum concerns as well. In a recent interview with Air Force Magazine, Global Strike Commander Gen. Timothy Ray discussed what the command is trying out as it heads into the 2020s. 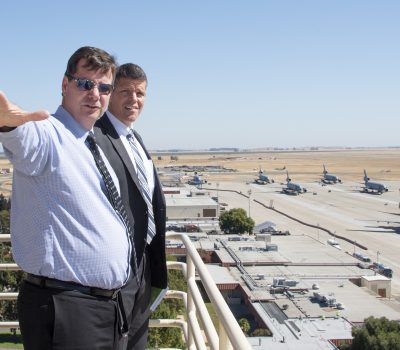 By Brian W. Everstine and John A. Tirpak
The Air Force is reviewing how Travis AFB, Calif., handled a recent power outage to determine how it can better prepare a base that is cut off from its electrical source, the service’s head of installations said. Travis AFB, Calif., suffered a power outage on Nov. 26, which limited some operations and required restricted manning on base until Pacific Gas and Electric was able to get power back the next day. This sudden, unexpected loss of power at a major USAF installation is a learning experience for the service, which will help outline steps it needs to take to be better prepared for similar events in the future, said John Henderson, the service’s assistant secretary for installations. 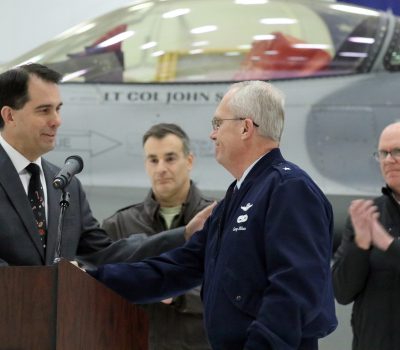 By Brian W. Everstine
Michigan’s lawmakers are calling on the Air Force to reassess its F-35 Air National Guard basing plans, and move the jet to Selfridge ANGB in the state instead of Truax Field ANGB in Wisconsin. The Air Force in 2017 selected Truax Field as the preferred location for an Air National Guard F-35A unit, along with Dannelly Field in Alabama. Lawmakers tout the base’s modern facilities, low cost of conversion, and a nearby training range as benefits to moving the F-35s to Selfridge. 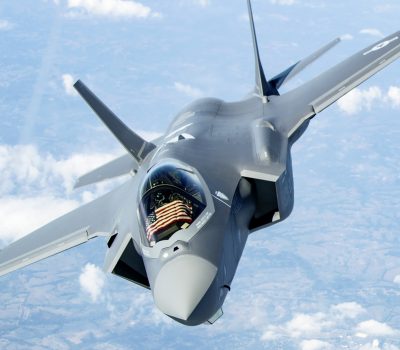 By Brian W. Everstine
The Pentagon on Nov. 26 awarded Lockheed Martin a $327.95 million contract for “long lead” material, parts, and components for Air Force F-35s in advance of the anticipated Lot 15 award. The advance acquisition contract covers components for some 48 F-35As for the Air Force, with work expected to be completed in June 2023, according to the Defense Department.

Behind Trump’s Secret War-Zone Trip: A Mar-A-Lago Escape, a Twin Air Force One and a Twitter Plan

The President gave his thanks to the troops in a visit to Afghanistan shrouded in secrecy and packed with the displays of military strength Trump loves.

Russia Shows Its Latest Weapon to US Inspectors

The Russian military says it has shown its latest hypersonic weapon to US inspectors. The Defense Ministry said Nov. 26 that it demonstrated the Avangard hypersonic glide vehicle to a team of US inspectors this week as part of transparency measures under the New START nuclear arms treaty with the US. It said the new weapon will be put on combat duty in December.

For the last stop of a multi-day tour spanning the US Central Command area of responsibility, Air Force Secretary Barbara Barrett and Chief of Staff Gen. David Goldfein visited Ramstein AB, Germany, on Nov. 22, where they received an overview of the US Air Forces in Europe-Air Forces Africa mission and the installation.

The Pentagon is searching for vendors to stand up the hybrid cloud platform its Joint Artificial Intelligence Center will use to build AI applications for the military.

The Defense Department operates hundreds of bases that support the daily operations of units in the Air Force, Army, Marine Corps, and Navy, providing services such as housing, utilities, and grounds maintenance, similar to what might be found in a town or city. In 2016, $25 billion—about 4 percent of DOD’s budget—was allocated to the costs of such services, called base operations support (BOS). The costs of providing such support vary between bases, and the factors that affect those costs are not clearly understood.

Service members are now being tested for fentanyl and norfentanyl during random urine tests, the Defense Department announced recently. After seeing increased use of the synthetic opioid pain reliever in the civilian sector, the DOD added fentanyl to the standard drug testing panel and began testing in June.

On Nov. 15, Motorola Solutions announced the installation of special security cameras at Offutt AFB, Neb., the home of US Strategic Command. The goal is for information provided by the cameras to provide crash data, beyond the black box.