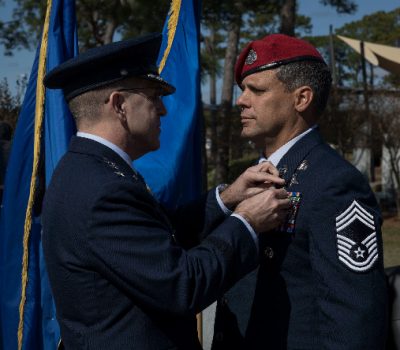 By Brian W. Everstine
The Air Force on Nov. 15 awarded an Air Force combat controller the Silver Star for his actions in Afghanistan in November 2007, following a USAF review of Air Force Special Operations Command valor awards. CMSgt. Chris Grove, the superintendent of the 720th Special Tactics Group at Hurlburt Field, Fla., was originally awarded the Bronze Star for his actions in the battle, but that award was upgraded following the review. 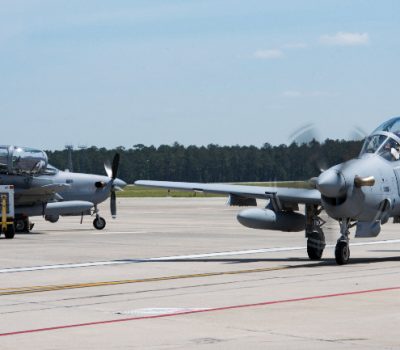 By Brian W. Everstine
Air Force Special Operations Command plans to use its small buy of A-29 Super Tucano aircraft, under the service’s light attack experiment, to bolster its air advisers’ ability to train and, in the long term, improve the armed overwatch capability it can provide to other services. Brig. Gen. David Harris, AFSOC’s director of strategic plans, programs, and requirements, said air advisers will be better prepared to train allied forces if they can work locally on the aircraft before deploying. AFSOC also will be better able to understand how the A-29 can help protect friendly forces under fire in austere locations. 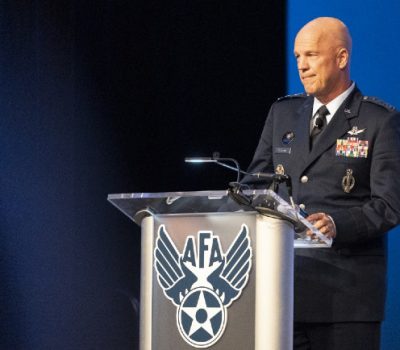 US Space Command is Starting to Figure Out How to Fight

By Rachel S. Cohen
US Space Command is beginning to pull together the budget and operations plans that will shape how it defends US systems in space and provides services like GPS navigation and communications to military personnel around the world. SPACECOM is in the process of forming a campaign plan that will be done in early 2020, AFSPC boss Gen. Jay Raymond said. “We’re beginning to have much more of an influence on the budget,” Raymond added during a Nov. 18 appearance at the Center for Strategic and International Studies. “That’s … a much more heightened voice at the combatant command level than we were at a component level.” He added that SPACECOM headquarters is set to grow from about 400 employees to around 500 over the next few months. 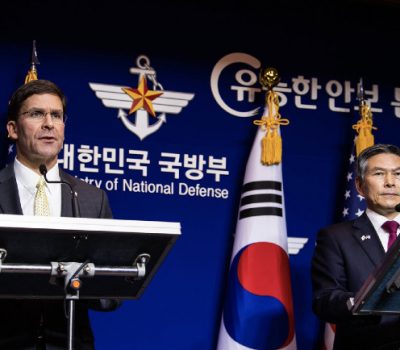 By Brian W. Everstine
The US and South Korea are canceling more exercises, including a recently announced small scale “flying training event” to allow for more discussions with North Korea, Defense Secretary Mark Esper said. While Esper said the move is an “act of goodwill to contribute to an environment conducive to diplomacy and the advancement of peace,” a North Korean spokesman said that country is not interested in more talks with the US.

Just months after Iran shot down an expensive US surveillance drone over the Strait of Hormuz, the Defense Department is weighing scrapping about two-thirds of the Air Force’s roughly three dozen Global Hawk unmanned aircraft as part of a shift toward building the new capabilities needed to counter China and Russia.

The results of the Pentagon’s second-ever full financial audit are a decidedly mixed bag: Although officials were able to point to some areas of significant progress in managing the Defense Department’s finances over the past year, overall, auditors are uncovering new problems faster than the department is fixing them.

As it grapples with the advent of multi-domain operations, NATO is asking industry how companies can help ensure interoperability among allied fighters, tankers, and airborne intelligence, surveillance, and reconnaissance platforms.

Department of Defense officials routinely talk about the need to more fully embrace machine learning and artificial intelligence, but one leader in the Marine Corps said those efforts are falling short. “We’re not serious about AI. If we were serious about AI we would put all of our stuff into one location,” Lt. Gen. Eric Smith, commander of the Marine Corps Combat Development Command and the Deputy Commandant for Combat Development and Integration, said at an AFCEA Northern Virginia chapter lunch Nov. 15.

Chief of Staff Gen. David Goldfein met on Nov. 15 with Israel Defense Forces Chief of Staff Aviv Kohavi and Israeli Air Force Commander Amikam Norkin, who presented Goldfein with the Chief of Staff Medal of Appreciation. Goldfein was participating in the Blue Flag joint military exercise, a 10-day exercise in which 70 combat planes from five air forces fly against each other in 19 sorties across six different locations around the country.

The Dayton Daily News via Military.com

An Air Force engineer and his team are offering one idea in an era of school and workplace shootings—a sturdy, portable, yet affordable door barricade. Dayton-based S9 Engineering Technology Corp. last month completed a patent license for the commercial rights to the device—dubbed the "Fortress"—invented at the Air Force Research Laboratory (AFRL), which is headquartered at Wright-Patterson AFB, Ohio.

As the prospects of an ongoing dialogue with the US over its ever-growing nuclear and missile programs continue to decline, Kim Jong Un visited North Korea’s Wonsan-Kalma International Airport to oversee what appears to be an unprecedented, at least in recent years, gathering of North Korean air power. Satellite images from Nov. 11 showed a very large number of aircraft at the airfield, which pointed to some sort of high-profile event being imminent.