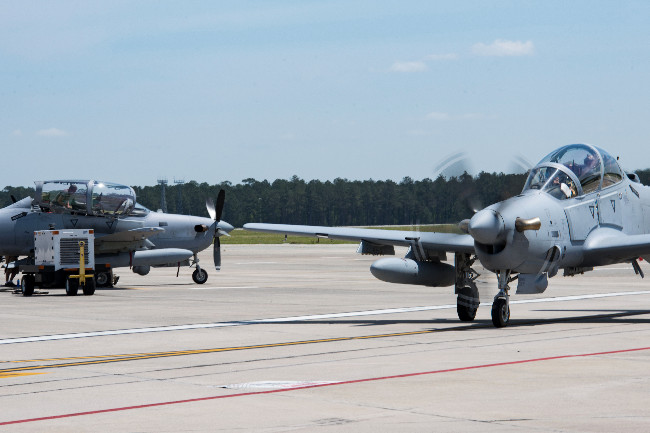 ​Air Force Special Operations Command plans to use its small buy of A-29 Super Tucano aircraft, under the service’s light attack experiment, to bolster its air advisers’ ability to train and, in the long term, improve the armed overwatch capability it can provide to other services.

Brig. Gen. David Harris, AFSOC’s director of strategic plans, programs, and requirements, said the A-29 will improve the command’s ability to continue to address the low-intensity, violent extremist fight in the future by bolstering allied capabilities and better protecting US forces under fire, in a way that current USAF assets cannot.

The service on Oct. 24 released the final request for proposals for the light attack experiment, calling for two to three AT-6s from Textron Aviation for Air Combat Command. These would go to Nellis AFB, Nev., for testing and development of operational tactics, according to a service release. The two to three Sierra Nevada Corp.-Embraer A-29s will go to AFSOC at Hurlburt Field, Fla., to create an instructor pilot program for air advisers to meet an “increase [in] partner nation requests for light-attack assistance,” the service said.

Harris, speaking Nov. 18 at an AFA Mitchell Institute event in Arlington, Va., said the air adviser mission is the top priority for AFSOC. The command wants to train its airmen on the airframe partner nations fly to “reduce risk” to the aircrew when they deploy to train a partner nation. Other countries that fly the A-29 include Afghanistan, Ghana, Nigeria, the Philippines, Colombia, and several others. Potential operators include other countries in hotspots such as Libya, Mozambique, and the United Arab Emirates, among others.

USAF air advisers can train and understand the A-29 to be able to deploy and provide a “PhD-level understanding” of the plane to partner nations, Harris said. The light attack experiment’s small buy of​ aircraft is acceptable at the moment because AFSOC only has a small number of air advisers, he said.

The second mission set the aircraft can meet is the ongoing need for close air support for US forces on the ground. For example, Harris looked at Africa, where US special operations forces deploy for combat operations in very remote and austere locations. A light attack aircraft can support them in close proximity, and be able to land at a small forward operating location nearby to rearm and refuel to get back to the fight.

“There is a need for it in the joint force, a joint need for this capability,” Harris said.

Currently, the Air Force relies on a “stack” of aircraft to provide air support. For example, an MQ-9 Reaper can prove overwatch for a long time without refueling, but lacks the pilot-in-the-cockpit situational awareness of an F-16, and the kinetic capability of an AC-130. In the future, AFSOC may need to, in a time of limited budgets, be able to combine many of these capabilities into one airframe that can operate in austere areas, Harris said.​