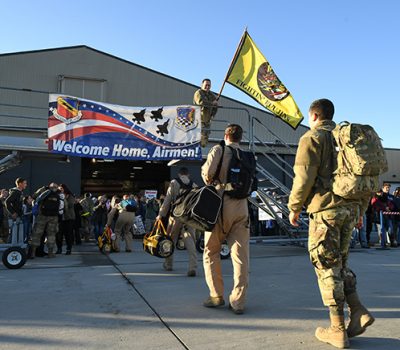 By Brian W. Everstine
Airmen from Hill AFB, Utah, recently completed their first six-month combat deployment with the F-35. On Nov. 1, airmen from the 388th and 419th Fighter Wings returned home to Hill after moving to Al Dhafra AB, United Arab Emirates. Joint Strike Fighters and airmen deployed in April for close air support missions to counter the Islamic State group as part of Operation Inherent Resolve, along with “regional deterrence against aggressors,” according to a Nov. 4 Hill release. 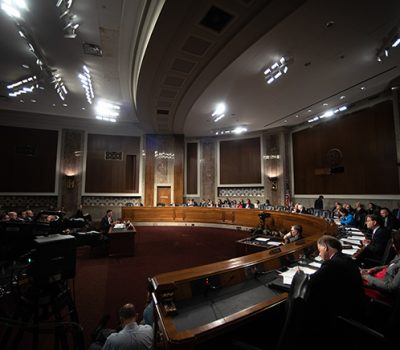 By Rachel S. Cohen
Lawmakers are running low on time to agree on a 2020 defense policy bill by the end of the calendar year, an issue that could be made worse if Congress goes forward with presidential impeachment proceedings. The Senate only has about three weeks of scheduled legislative days left in 2020, and the House has about two weeks.“Congress has a lot on its plate,” a staffer assigned to the Senate Armed Services Committee said in a Nov. 3 email. “The Senate’s time could be devoted entirely to impeachment in December and likely well into January, leaving no room for legislating.” The timing is key because earlier authorizations are set to expire. Congress is usually able to renew them by the end of the year. 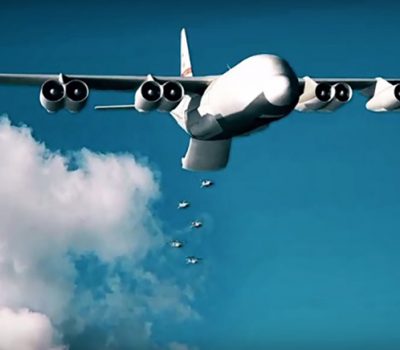 By Rachel S. Cohen
The Air Force is planning experiments and briefing senior leaders on progress toward its “arsenal plane” idea, looking at multiple aircraft options to fly with a large weapons cache to back up strike assets. An arsenal plane would be a multi-engine platform that accompanies remotely piloted aircraft and fighter jets in combat and totes “network-enabled, semi-autonomous weapons,” according to a 2016 Air Force video. Senior leaders are still discussing the concept, which has been around for years under the Defense Department’s Strategic Capabilities Office. But while the possibility of using a mobility platform to perform that role may be on the table, some experts say the Air Force should look elsewhere. 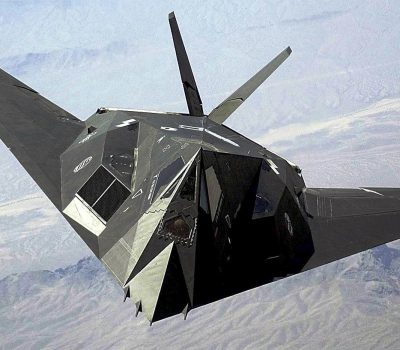 The Air Force Space Command will hold a tabletop exercise this week focused on the future of military launch facilities and how they can support growth in commercial space. The exercise, to be held Nov. 5-7 in Chantilly, Va., is an effort by Air Force Space Command to gather ideas on how to transform the military’s launch ranges into multi-use national spaceports that can better accommodate national security, civil, and commercial launch demands.

What the Air Force Can Learn from These Experimental Satellites

The Air Force launched two experimental cubesats Nov. 2 that could provide key insights on the viability of fielding a proliferated constellation of satellites in low earth orbit in the next few years.

The Defense Innovation Board just published draft guidelines for artificial intelligence ethics at the Defense Department that aim to keep the emerging technology in check. Some of them are more practical (such as demanding reliability) or have roots in years-old policies (demanding human responsibility at every stage), but others are relatively novel for both the public and private spheres.

“The Air Force has been working to develop a single modernized computer system to enable more effective operations of military and other government satellites and space systems. Such a system could better respond to threats ranging from jamming attacks to space debris,” the US Government Accountability Office writes. “The past three programs to attempt this have ended up significantly behind schedule and over budget. The programs also deferred more difficult work.”

CISA, DARPA Offer Look into Their Dealings with Deepfakes

Agency and industry officials this week detailed their efforts to improve public resiliency, streamline communication, and accelerate technical solutions to counter the threats posed by deepfakes and other disinformation techniques ahead of next year’s election.

OPINION: Through a Gender Lens: The Need for Robust Research into Diversity and Military Effectiveness

“Conflicts will continue to develop and evolve in the future, and the complexity of warfighting will continue to confound its wisest scholars,” writes Marine Corps Lt. Col. Jeanette Gaudry Haynie, founder and executive director of the Athena Leadership Project. “By building a fuller understanding of the tools at our disposal, particularly diversity of perspective and thought within the military, we can increase the effectiveness of leaders, improve the development and implementation of policy, and better understand security as a whole.”

It seems someone at Kirtland AFB, N.M., may have gone as Walter White for Halloween. Some trick-or-treaters going door to door in Kirtland’s on-base residential area last night ended up with small plastic pill baggies containing a crystalline blue substance, Kirtland spokeswoman Eva Blaylock confirmed to Air Force Times on Nov. 1. Although the substance resembles the “blue sky” crystal methamphetamine cooked up by the antihero of the show “Breaking Bad”—which was set in nearby Albuquerque—Blaylock said it was believed to be rock candy. But the Office of Special Investigations at Kirtland isn’t laughing.