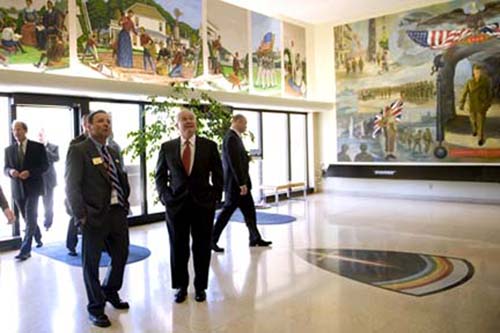 Saturday at the Eisenhower Presidential Library in Kansas, Defense Secretary Bob Gates said the "gusher" in defense spending that opened immediately after the 9/11 terrorist attacks "has been turned off." He projected military spending "on things large and small" will face "closer, harsher scrutiny" given America's "difficult economic circumstances." He called it "a simple matter of math." Gates decried the way DOD sets weapons requirements and claims "alleged" gaps. He emphasized, too, that to sustain even today's force structure will require a change in operating "style and substance" not just procurement cuts. He wants to reduce "overhead costs and to transfer those savings to force structure and modernization within the programmed budget." By doing this, Gates expects to harvest that two to three percent real growth he believes will sustain sufficient force structure in the current war and provide for "an uncertain future." (Gates' speech)

Last week the Air Force ushered in its first class of combat systems officers to undergo training at new facilities at NAS Pensacola, Fla., under the supervision of the 479th Flying Training Group, activated last fall. The last class of...

The Air Force has awarded a $49 million contract to Raytheon to begin engineering and manufacturing development of the Miniature Air Launched Decoy stand-in jammer variant, known as MALD-J. The Air Force already has contracted Raytheon for low-rate initial production...

A mixed crew of Air Force Reservists from the 349th Air Mobility Wing at Travis AFB, Calif., and active duty from the 60th AMW at Travis flew the Coast Guard’s Pacific Strike Team from California to Mobile, Ala., to provide...

From Fighter to Attack Wing

The New York Air National Guard’s 174th Fighter Wing, which transitioned from the F-16 fighter to the MQ-9 Reaper hunter-killer remotely piloted aircraft, conducting its first Reaper mission in Afghanistan in December 2009, will be converting to an attack wing,...

Sen. Carl Levin (D-Mich.), Armed Services Committee chairman, last week wrote Defense Secretary Bob Gates, asking him to clarify the intent of a working group reviewing "Don't Ask, Don't Tell" (DADT). Levin asked if it was "to determine 'whether' to repeal the statute or is it to assess the issues related to 'how' to implement a repeal?" In his May 6 reply, Gates recalled his Feb.2 testimony in which he said, "The question before us is not whether the military prepares to make this change but how we … best prepare for it." He wrote that the review effort "is charged with assessing the impact of repealing 10 USC 654 and developing a plan to implement such a repeal in the most informed and effective manner possible." He continued, writing that the outcome was meant "to fully inform both Presidential and Congressional decision-making." (Levin letter; Gates' response)

The Air Force has awarded the Bronze Star Medal to TSgt. Andrew LeBeau, an explosive ordnance disposal specialist with Air Force Reserve Command’s 944th Civil Engineer Squadron at Luke AFB, Ariz., for his actions while deployed to Afghanistan. He was...