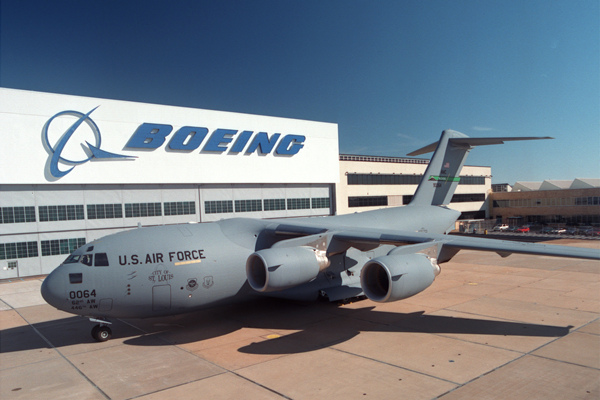 hree Senators are questioning whether the Air Force has "induced" Boeing into "assuming the business risks" of keeping its Long Beach, Calif., C-17 production line open beyond mid-2009 "until new Air Force orders materialize." Two of the Senators—Tom Carper (D-Del.) and Ted Kennedy (D-Mass.) are staunch supporters of the C-5 airlifter. The third—John McCain (R-Ariz.)—is a frequent Air Force (and Boeing) critic. On Tuesday, the three released a letter they sent July 20 to Defense Secretary Robert Gates, in which they request copies of all communications from anyone in DOD or the Air Force with Boeing about an "Air Force request for 30 more aircraft." Air Force officials have told Congress that they would prefer to retire the 30 worst aircraft in the C-5 fleet and purchase new C-17s in their place. The Senatorial trio notes that USAF has not yet formally requested funding for the additional C-17s and says the service told them that it would not do so in the 2009 budget request. So far, of course, Congress has prevented USAF from retiring any C-5s, but the service appeared to have gotten increased support for its position during budget hearings this spring. More recently Senators seem inclined to interject a pause in the C-5 vs. C-17 debate for DOD to deliver a new independent review of strategic airlift needs.

Members of the House Appropriations defense panel want the Air Force to explain—in detail—just what selection criteria it used in the combat search and rescue helicopter replacement program, reports Roxana Tiron of The Hill. The CSAR-X program already is under...

Speaking to a breakfast gathering on Capitol Hill Tuesday, US Air Forces in Europe commander Gen. Tom Hobbins said that USAFE hasn’t seen the last of its transformation efforts—or downsizing. Despite earlier comments that USAFE has taken its share of...

Hobbins on Russia and CFE:

Asked what his analysis of Russia’s recent withdrawal from the Conventional Forces in Europe treaty means for US Air Forces in Europe and NATO efforts, USAFE boss Gen. Tom Hobbins told a Capitol Hill crowd that he plans to continue...

The Government Accountability Office basically has just confirmed what the Air Force has been saying for years: Unmanned aerial vehicles should be under joint air operations control. Granted this new GAO report discusses the issue couched within the larger employment...

The Air Force does plan to work with Lockheed Martin through next spring to bring the Joint Air-to-Surface Standoff Missile program back in line, but Rebecca Christie of Dow Jones Newswires reports (via CNNMoney.com) that the service also plans to...

Two veterans groups—Veterans for Common Sense and Veterans United in Truth, Inc.—have filed a lawsuit against the Department of Veterans Affairs for “shameful failures” in the care of “hundreds of thousands of men and women who have suffered grievous injuries...

The AVF vs. a Draft, Again:

Advocates of instituting a new military draft say they fear that the All-Volunteer Force will run short of recruits or that the less-affluent segment of our society will unfairly shoulder the burden of current combat operations—take your pick. As with...

The recent stand up of the 434th Fighter Training Squadron at Laughlin AFB, Tex., means the wing is departing from its previous singular mission of turning out novice pilots. Col. David Petersen, 47th Operations Group commander, calls the activation of...

Air Sorties in the Global War on Terrorism