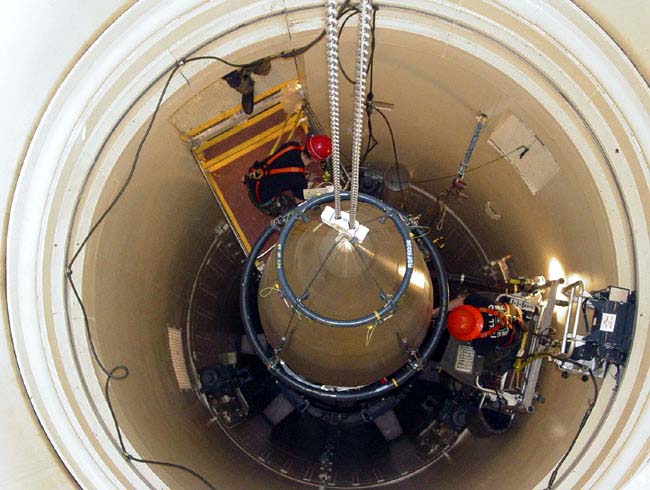 Dec. 6, the day after the START I agreement expires, the US will no longer have verification measures at its disposal to monitor Russian strategic nuclear forces, said Sen. Jon Kyl (R-Ariz.), co-chair of the Senate’s National Security Working Group, in a floor speech earlier this month. Yet, warned Kyl, "no one appears to know what will come next" between START I's expiration and the potential entry into force of a follow-on arms-reduction treaty with Russia. Kyl believes "this borders on malpractice," given that Administration officials understood this issue going into negotiations with Russia. It took the Senate about 14 months to ratify START I so the pending period without verification measures may be lengthy, he suggested. (Kyl has co-sponsored with Sen. Richard Lugar (R-Ind.) and Sen. John Kerry (D-Mass.) a resolution (committee report) to assist the Administration in forging a "bridging arrangement" to extend the START I protocols.)

Both the 377th Air Base Wing and 498th Nuclear Systems Wing at Kirtland AFB, N.M, received an unsatisfactory rating during a six-day nuclear surety inspection held earlier this month. Although 12 individuals and five teams were recognized for superior performance,...

Eglin AFB, Fla., is under consideration as a “reprogramming facility” for developing and distributing F-35 software upgrades to future international operators of the stealth fighter. So reported Reuters news wire service Nov. 24, citing a senior F-35 program official. According...

An MQ-1 Predator remotely piloted vehicle went missing on Nov 21 during a mission over southern Afghanistan after contact was lost between it and its human controllers on the ground, Air Forces Central announced Nov. 25. The command said there...

A Delta IV rocket is slated to carry the Air Force's newest communications satellite, WGS-3, into orbit on Wednesday from Cape Canaveral AFS, Fla., said officials with the installation's 45th Space Wing in a release. WGS-3 is the third in the series of Wideband Global Satellite Communications satellites that the Air Force is procuring to augment and eventually replace the legacy Defense Satellite Communications System constellation. Each WGS spacecraft provides a giant leap in communications bandwidth over DSCS satellites. WGS-3 will reside in orbit over the eastern Atlantic Ocean, joining WGS-1 that sits above the Pacific Ocean, and WGS-2, which supporters warfighters in Afghanistan and Iraq from its perch high above the Indian Ocean.

The Air Force’s new physical training uniform is not only upgraded with better material and functionality, but is also 100-percent America made, according to the Air Force Uniform Office at Wright-Patterson AFB, Ohio. American Power Source, a military clothing maker...

Approximately 177,000 official military personnel files are now part of the public record with their transfer on Nov. 18 from the Air Force Personnel Center to the National Archives and Records Administration in St. Louis for permanent retention. USAF is...

Pratt & Whitney announced Nov. 23 that it has delivered the 400th F119 engine to the Air Force for the F-22 stealth fighter force. In a company release Nov. 23, Tyler Evans, Pratt’s F119 program director, said this delivery is...