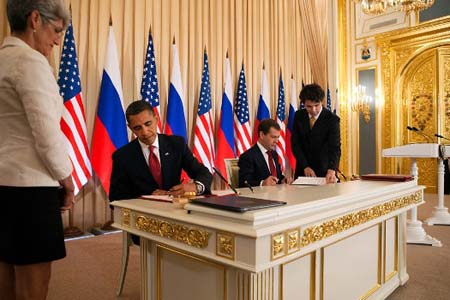 t Obama and Russian President Dmitry Medvedev yesterday signed a document in Moscow that sets the parameters for reductions in the two nations’ nuclear force levels by up to one-third beyond the current ceilings laid down in the 1991 START (strategic arms reduction treaty) and 2002 SORT (strategic offensive reductions treaty or Moscow treaty) agreements. This joint understanding for the START follow-on treaty states that both sides are committed to reducing their strategic warheads to a range of 1,500 to 1,675, and their strategic delivery vehicles to between 500 and 1,100. Under START and SORT, the maximum amount of deployed warheads is currently 2,200 and the maximum allowable level of launch vehicles is 1,600. “As the world’s two leading nuclear powers, the United States and Russia must lead by example, and that’s what we’re doing here today,” said Obama at a joint press briefing with Medvedev. The joint understanding is meant to guide the remainder of the negotiations that will culminate in a new legally binding agreement that will replace START, which expires in December. The new treaty, which Obama said yesterday would be completed by year’s end, will include effective verification measures, according to the joint statement. News of this comes as the US is still in the midst of a nuclear policy review that is supposedly meant to determine our nation’s future strategic deterrent needs. (Obama-Medvedev briefing transcript)