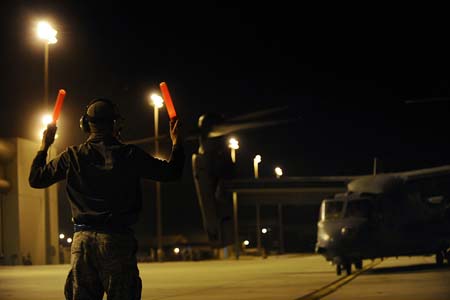 Six CV-22 tiltrotor aircraft and airmen from the 1st Special Operations Wing at Hurlburt Field, Fla., returned home earlier this month from a previously undisclosed three-month deployment to Southwest Asia. This was the first combat tour for the CV-22. (Its Marine Corps cousin, the MV-22, has already served in Iraq and is now operating in Afghanistan.) The Northwest Florida Daily News reported that the CV-22s were in Iraq. Asked Nov. 20 to confirm this, TSgt. Angela Shepherd, a 1st SOW spokeswoman, would only say the CV-22s went “in support of Operation Iraq Freedom.” She added that the mission commander during the deployment was “pleased with how everything went.” AFSOC, as is its practice, kept a tight lid on this mission and did not release any information until the CV-22s returned home, said Shepherd. They arrived back at Hurlburt Nov. 12. (Includes Hurlburt photo caption)