Could Cyber Command Find a Home in Old Prison? 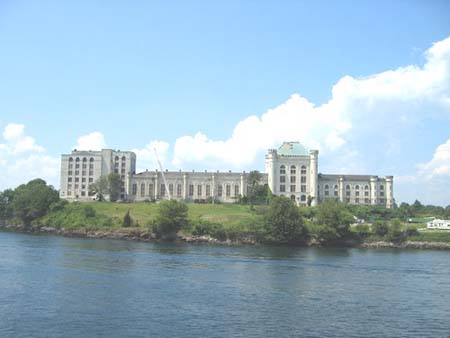 If New Hampshire Rep. Carol Shea-Porter (D) has her way, the Air Force would put its new Cyber Command in an old abandoned Navy prison near Portsmouth. Shea-Porter told reporters May 2 that the reuse of the Portsmouth Naval Shipyard prison is a “win-win project.” The Navy now wants to lease the facility, which was built in the 1900s on Seavey Island across the Piscataqua River from Portsmouth, to private developers, according to a May 3 report on Seacoastonline.com. According to the online news outlet, Shea-Porter staffer Ryan McKeon said that proximity of Pease Air National Guard Station would provide USAF “unlimited access to an airstrip” near “one of the most secure military facilities in the world,” namely the shipyard, which occupies 297 acres, fully encompassing Seavey Island. He added of the “highly fortified” former prison, “You couldn’t take it down if you wanted to.” MeKeon termed Navy officials “receptive” to the idea. The Navy only last month began efforts to lease the prison, closed since the 1970s, and which comprises a 265,000 square-foot building and 11.6 acres of land. The New Hampshire facility is only about 50 miles from Boston, but the Massachusetts Congressional delegation also would like to secure the new command. The Air Force sent letters in March to the governors of 18 states on a short list for the new command—New Hampshire was not on that list—and expected to initiate a formal request for information by May 15. The Air Force already has delayed plans to announce the permanent location until September 2009, but in the interim, the service intends to activate Cyber Command at its temporary location at Barksdale AFB, La.