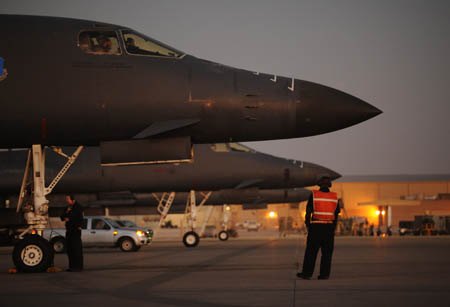 Air Force may proceed with plans to phase out of service six of its 66 B-1B bombers in this fiscal year, according to the enacted Fiscal 2012 defense legislation. However, lawmakers stipulated in the omnibus spending act, which includes this year’s defense appropriations, that the Air Force must “reinvest a larger portion” of the savings realized from retiring those six bombers in the remaining B-1 fleet than the “less than 40 percent’ that the service proposed. Language in the defense authorization act stipulates that USAF may not retire any B-1s until it reports to Congress on the details of the plan, including “an estimate of the savings that will result” each year through 2022 and how it intends to modernize and sustain the B-1 fleet through then. The authorization act also directed the Air Force to maintain at least 33 combat-coded B-1s through Fiscal 2016. President Obama signed the omnibus spending act, H.R. 2055, into law on Dec. 23. He inked the defense authorization act, H.R. 1540, on Dec. 31.