Skip to content
Rose Gottmoeller (top), former under secretary of state for arms control and international security, advocated for a five-year extension of the New Strategic Arms Reduction Treaty during a Dec. 2 panel discussion moderated by Shannon Bugos (bottom), a research assistant at the Arms Control Association, during the organization's annual meeting. Screenshot photo.
Expand Photo 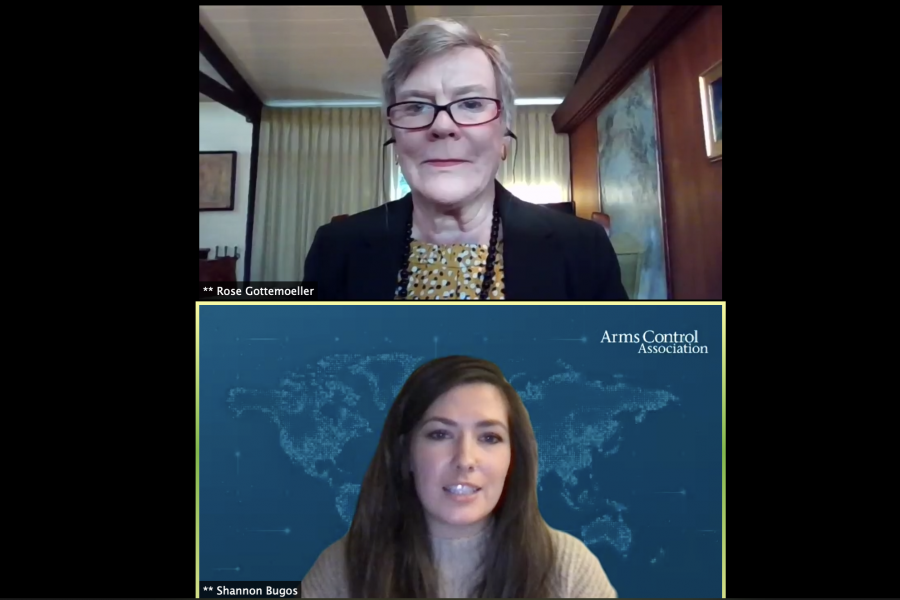 President-elect Joe Biden’s administration will have just 16 days after Inauguration Day in January to strike a deal with Russia to extend the New Strategic Arms Reduction Treaty. If they fail to agree, the last remaining pact limiting the two countries’ nuclear arsenals will expire.

New START is set to expire on Feb. 5, 2021 unless an agreement is reached. The treaty limits each party to 1,500 deployed nuclear warheads and allows up to 700 of any combination of deployed intercontinental ballistic missiles, submarine-launched ballistic missiles, and nuclear-capable bombers.

It appeared a deal was on the horizon in October, with the Trump administration proposing to extend the treaty for one year, plus a yearlong freeze on the number of nuclear warheads each country has deployed. The U.S. also wanted steps to verify that pause as well.

Russia agreed to the extension and the freeze but rejected any type of verification, sidelining negotiations until after the U.S. elections on Nov. 3. Russia has since said it plans to table further discussions until the Biden administration comes in next month. Tony Blinken, one of Biden’s top advisers and his pick for Secretary of State, recently hinted that the new administration would pursue a full five-year extension.

Rose Gottemoeller, who previously served as NATO’s deputy secretary-general and as U.S. undersecretary of state for arms control and international security, has long been an advocate of a five-year extension. She argues the “predictability and stability” it will provide is necessary as the U.S. looks to modernize its nuclear capabilities over the next decade.

“I always thought it was impractical to achieve a new treaty in one year. Perhaps, you could do it in two years, but even with New START, which was a very quick negotiation, it took a full year to negotiate the treaty and another 10 months to get it through the ratification process on Capitol Hill,” Gottemoeller said during the Arms Control Association’s virtual annual meeting on Dec. 2.

However, Gottemoeller said the freeze proposed by the Trump administration “is an important principle.” She added it’s important to “move quickly to turn it into a verifiable limit.”

China was another sticking point in previous negotiations. The Trump administration wanted to bring them into the treaty, while Russia refused to pressure Beijing to join. Gottemoeller said it makes sense to negotiate with China, but any constraints need to be in an area where China shares some equality with the other two countries.

The United States and Russia own more than 90 percent of the world’s nuclear weapons, “so the notion of shoehorning them into New START never made sense,” she said.

Tom Countryman, ACA’s board chairman and former acting undersecretary of state for arms control and international security, said extending New START opens the door to a trilateral dialogue between the U.S., Russia, and China on concerns about each other’s nuclear arsenals and postures.

“That’s the way to get started. It’s not easy to convince the Chinese that they have a stake in the process at this point, when their nuclear arsenal is so much smaller than that of either the United States or Russia,” he said.

But China isn’t wooed by the argument that it “should be honored to be at the big boys’ table together with the U.S. and Russia,” Countryman added. “If there ever was a time to make the effort, it is exactly at the moment that we are transitioning to new leadership in the United States.”

Gottemoeller said it’s possible China would be open to limits on intermediate-range ground-launched missiles as an alternative to banning them altogether.

“That’s an area we should really look into, because unlike in the era of the [Intermediate-Range Nuclear Forces] Treaty, when we had the ban on all such missiles, we now know enough about monitoring and the presence or absence of warheads on the front ends of missiles,” she said. “There’s no reason why we couldn’t engage the Chinese on new limits. … They may have an interest in such negotiations because they, I’m sure, they want to prevent the deployment of such weapons in Asia.”

The 1987 INF Treaty eliminated all U.S. and Soviet ground-launched ballistic and cruise missiles in the 500- and 5,500-kilometer (300- to 3,400-mile) range, and prohibited their future production or deployment.

The U.S. pulled out of the Cold War-era treaty last year. President Donald J. Trump said in February that the U.S. “will move forward with developing our own military response options and will work with NATO and our other allies and partners to deny Russia any military advantage from its unlawful conduct.”

“We stand ready to engage with Russia on arms control negotiations that meet these criteria,” Trump added.

Gottemoeller believes Moscow and Beijing could get on board with a regional ban or other caps on nuclear-tipped intermediate-range, ground-launched systems.

“We should be exploring some new directions, and we should bear in mind that, frankly, we’re beyond the approach that was taken in the INF Treaty, which was simply to ban all such missiles, whether nuclear or conventional,” she added.